If you know something, please leave your comment. Thanks!

After the expiratory of seven years “leash agreement” between DWM and Vickers in 1898, DWM started to take foreign sale orders from such as Russia, Swiss. According to Goldsmith’s research the earliest known DWM Maxim gun sold to China was in 1913. Nevertheless, documents of Imperial China government indicate that China had bought commercial Maxim guns before DWM started to export MG09. At least dozens of DWM commercial Maxim guns were sold to China through 1911.

At the beginning of 1908, both Sichuan province and Yunnan Province bought dozens of German Maxim guns. These guns were to arm its provincial “New Army”. During the period, Sichuan ordered 20 German guns through Telge & Company at price of 2600 Marks and Yunnan ordered 18 German Maxim guns alongside 6 Madsen guns through Carlowitz & Co at a “higher price than Sichuan’s order”. Governors-General of Yun’gui reported that Yunnan’s Maxim guns were manufactured by a Germany company “Lu fou”, Chinese transliteration of “Loewe”,  which China was used to call DWM/Ludwig Loewe Company. All these guns were requested by China chambering in 6.8 Chinese Mauser cartridge.

We are lucky to have pictures of the Machine guns of 9 Division’s special machine gun detachment during the Taihu Exercise. British officer, General H.R Davis, then he was a colonel, took several pictures of these “8m/m Maxim Guns of Northern Army”.

In Imperial army exercise, two opposing forces would be labeled as either North or South, just like we do that in red or blue nowadays. The “Northern Army” was played by 9 Division.

In H.R Davis’s photo （above）, the maxim gun in the front has mixed features from both Vickers and DWM gun: It has VSM New Light 1906’s corrugated water jacket but a German style fusee cover and MG08 spade grip handle. Note the blank firing booster which is almost same to the Ruckstossverstarker 08 P used on MG08.

The tripod is a hodgepodge of VSM’s and DWM’s features. Here is a comparison of several VSM and DWM tripods. On top right corner is a VSM 1906 tripod, below it is the mysterious DWM tripod, on left is VSM 1904 experimental gun tripod, in the middle is a DWM Argentina model, on bottom is VSM 1901 tripod. 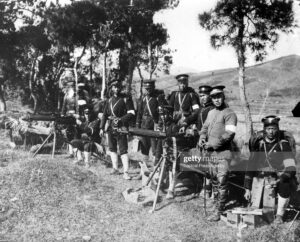 Machine gunners with the mysterious Maxim gun. Soldiers in this picture was erroneously recognized as Imperial Japanese by Goldsmith. Imperial Chinese Model 1905 uniform borrowed designs from Japanese uniform but the hat insignias are different. Chinese hat insignia is a larger round dragon emblem comparing to a small five-point star used by Japan. Goldsmith had this picture from James A Irons’ collection, military attache of US Embassy in Japan, the original caption of this picture reads “Maxim Guns made in Berlin”

Imperial army has a long history of using Maxim guns since early 1890s. After the boxer rebellion, the newly established land force, so called “New Army” started to incorporate a machine gun detachment. In theory each detachment should have four machine gun companies, each has 6 guns. Only a few divisions were funded to organize MG detachment and the size of their MG detachment dependents on how much money were allotted. For instance, 19 Division had a full size 24 guns detachment, while 9 Division had only 8 guns in 1911.