The simplicity of unlocked systems tends to be both their greatest strength and weakness.  While the mechanisms can be comparatively easy to design and manufacture (and therefore often have a lower price tag), they are also limited in the potency of caliber they can accept – the more powerful the round, the more mass and heavier springs are necessary to slow the opening of the breech until pressures have dropped to a safe level.  With the notable exception of the Hi-Point line of pistols, few successful unlocked systems have been achieved in a traditional handgun format with rounds of much more power than .380.  On the other end of the scale, unlocked guns firing low pressure cartridges, .22lr being a very common option, often struggle to operate consistently, and usually prefer higher power and better quality controlled ammunition.

Just as these systems are the simplest in terms of mechanical function, they also employ a smaller number of distinct action types… two to be specific.

Blow forward actions are by far the rarer and less straight forward of the two.  In these actions, the breechface is generally a surface affixed to the frame, and it receives the brunt of the recoil force with no additional mitigation.  The functions of the action are instead driven by the bullet as it engages the rifling and attempts to pull the barrel forward with it.  Once the forward momentum from the drag of the bullet overcomes the inertial mass of the barrel and the force of the recoil spring, the barrel is pulled forward as the action of the gun opens in order to cycle the next round.  With its forward energy expended, the barrel is then returned rearward by the recoil spring, chambering a new round in the process.

Only a few handguns were ever designed with this unconventional action, the most common being the Schwarzlose 1908/09 (also sold under the Warner name).  This is likely due to some unfortunate and inherent drawbacks of the system (as reported by those lucky enough to own them, which is sadly not the author to date).  Working the action requires pulling the barrel forward in a less natural motion that can potentially leave the off hand in front of the freshly loaded barrel.  Recoil is also reportedly more severe than would be expected due to the initial recoil impulse having no rearward travelling mass to mitigate it… and then being compounded by the barrel mass being driven back sharply in a secondary impact.

Nevertheless, they remain an intriguing and unique design.

Blow back firearms really need no further introduction.  Their function is simply the opposite of blow forward, with the recoil energy overcoming the reciprocating mass and spring(s) to drive the breech rearward, extracting and ejecting the case.  This is be followed by the spring(s) returning the breechface (in the form of a slide or bolt typically) back forward, loading another round, and closing into battery.  These guns make up nearly all of the unlocked arms designs, and whereas they are now primarily relegated to use in .22lr and Hi Point pistols, simple blow back pistols were particularly common in small centerfire cartridges at the dawn of the 20th Century.  One such very popular such design was the Colt 1903 Pocket Hammerless, shown here; while it bears little similarity to a later more famous Colt of a designation some 8 numbers higher, it is clearly designed with the same styling and ergonomics in mind.  The author’s example has been refinished somewhat indelicately, but still exemplifies the mechanism well. 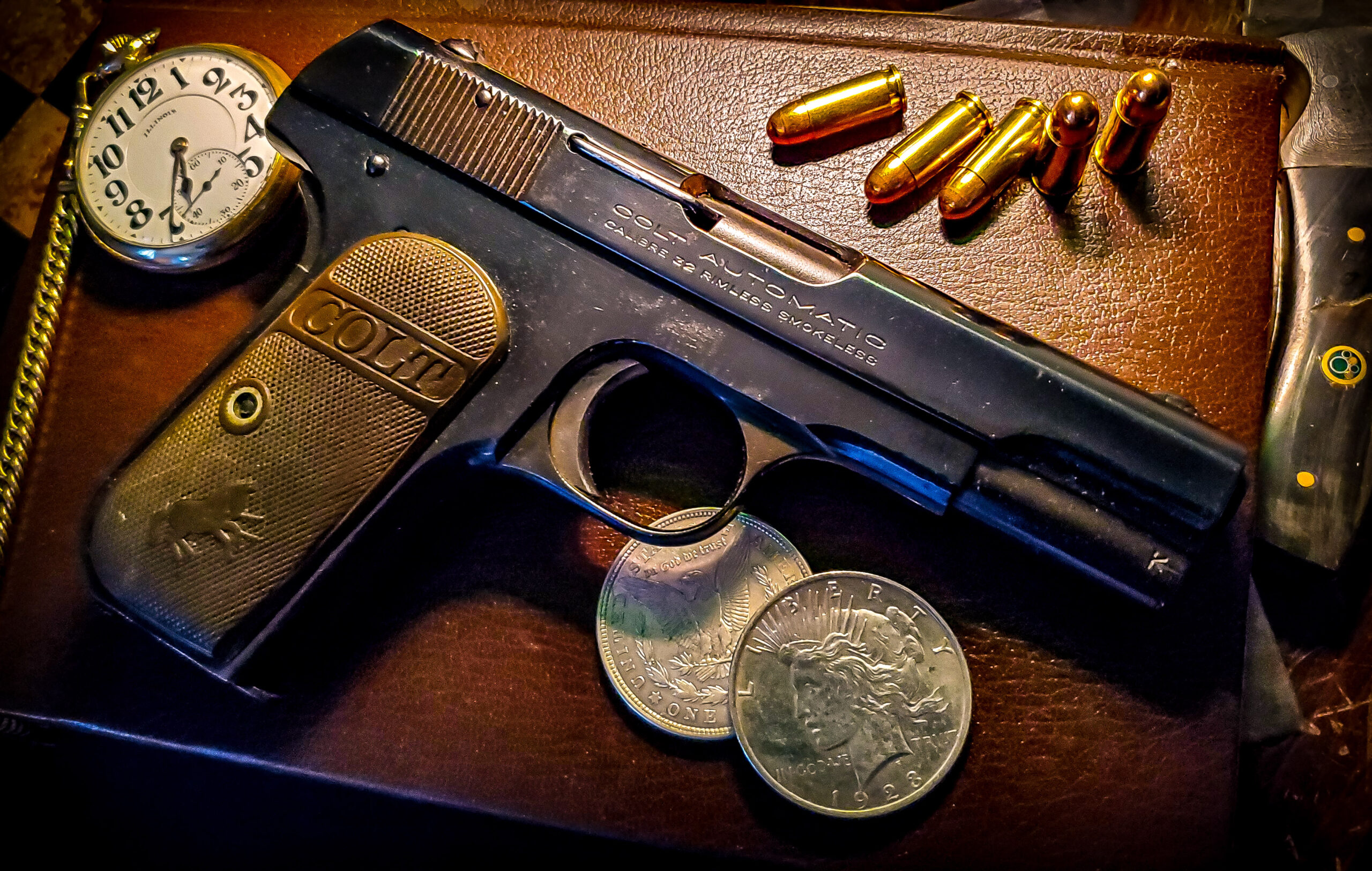 While most blow back guns solve the problem of slowing the opening of the breech until pressures drop to safe levels by increasing the inertial mass of the slide and resistance of the spring, there is another method made available by attacking the problem from the other way around.  The HK VP-70 bears a noteworthy place in history as the first production handgun to use a polymer frame, but this presented many challenges as well.  The gun was chambered in 9mm which is generally too spicy for most blow back handguns, and the author suspects the polymers of the 1960s and 70s probably weren’t up to the task of absorbing nearly so much recoil energy as they are required to today.  So, if you don’t want to increase the weight of the gun to counter the pressure of the cartridge, why not reduce the pressure instead.  Indeed, this is why most blow back pistols are chambered for .380 or smaller, but to use off the shelf 9mm ammo, another way of reducing the pressure was needed.  This was achieved by simply cutting the rifling in the barrel so deep that the bullet itself would not filly fill the rifling grooves.  The remaining gap allowed gas pressure to vent around the bullet even as it was traveling down the barrel so that the pressure was suitably diminished in time for the more rapid opening of the breech.  Whilst a clever and interesting solution to make a 9mm recoil like a .380, it did have the unfortunate side effect of similarly reducing the energy of the bullet down to that of a .380 as well.  Tradeoffs…