Adopted in 1943 (or 2602 in the Japanese Imperial calendar), the Type 2 was the first and only production rifle made for Japanese paratroopers after the earlier prototypes, the Type 100 and Type 1 were found to be unsatisfactory. The Type 1 was a Type 38 carbine that had it’s stock cut in half right behind the action and a hinge installed to allow the two pieces to fold. The hinge was weak and the stock prone to cracking. The Type 100 was a better design being a standard Type 99 quite literally cut down the middle between the chamber and barrel with an interrupted thread design added to mate the two halves back together. It was found that the more the rifle was fired the threads would stretch more and more and because of that the design was rejected. The Type 100 was found to be the better design of the two prototypes and more work went on perfecting it.

To fix the stretching issue the designers came up with an angled wedge. Now if the action stretches from firing, the wedge would just be driven into it’s matching surface on the barrel deeper. This is why the screw that the wedge attaches to won’t screw all the way into the receiver. It’s to allow for stretching. 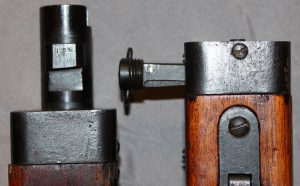 All rifles were made by Nagoya Arsenal starting in late 1943 through early 1944 and about 20,000 were made in total. The features of a Type 2 is what you would expect find on a Type 99 made in late 1943 by Nagoya Arsenal. It has it’s AA sight wings, earlier made rifles would have come with a dust cover, but none have a monopod. None of the rifles came with the simplified “last ditch” parts, but a few in about 3/4 of production run seem to have rougher “spoke shaved” made stocks before returning to “normal” smooth sanded stocks. Later rifles lacked chrome bolt faces, but all seem to have chromed barrels. A special bayonet was made for these rifles that are shorter than the standard Type 30 bayonet. The cleaning rod for these rifles are almost like a standard full length Type 99 cleaning rod, but are about 2 inches shorter thanks to the fact the rifle breaks in half where a normal cleaning rod would end on a Type 99. A cutout above the rear sling swivel was cut into the stock to allow the hook of the quick detach sling to easily come on and off. Such slings were used on standard Type 99s (and similar ones for the LMGs) but these were the only rifles that received such a cutout. The hook tears up the wood around the swivel if one was ever used. 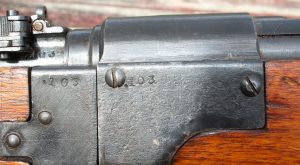 The rifle was designed to be carried in a bag on the soldier’s chest. Below is a photo of an American nisei soldier modeling the Japanese paratrooper gear. The soldier has a paratrooper version of the Type 100 sub machine gun, but the gear is the same for the Type 2 rifle. 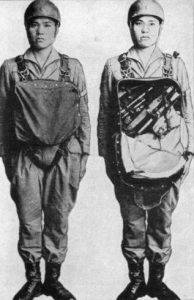 While the rifle was well designed for it’s intended purpose, it was never used as such. The Japanese never carried out paratrooper operations late in the war. A lot can be found in really nice condition owing to the fact that few were ever used. It wouldn’t surprise me most were still in Japan when the Japanese surrendered. Unfortunately a lot have mismatched halves probably do to the fact that they were split apart when found in the immediate post-surrender piles. You may think that a rifle that only 20,000ish were made would be a rare find, but the reality is that the rifle was just as cool in 1945 as it is today in 2020. If you were a soldier and had to pick between a typical Type 38 or a Type 2 which would you pick? So yeah, their survival rates are pretty high, although bubbas in the 50s and 60s loved to butcher them too. The one thing they are is pricey, especially one that is matching. Finding one with an intact chrysanthemum is also harder as are ones with their original cleaning rod.