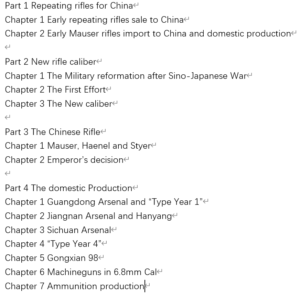 The first effort of adopting a small caliber smokeless powder cartridge repeating rifle was made in 1899. After the disaster of First Sino-Japanese War, Qing government was starting to build a new Army equipped with modern weapons.
At the period, the most advanced rifle produced domestically were the Chinese copy of German Gew88 rifle and Jiangnan Arsenal’s Kuaili rifle which chambered in its propriety .303 cartridge. Qing Government wanted to adopt a standard issued rifle to replace its wide varieties of rifles from muzzle loading Enfield P1858 to Gew 88.
Qing government conducted comparison tests of Gew 88 and Kuaili between 1897 and 1898. Chinese copy Gew 88 won out the competition, which became the first standard issue rifle in Emperor’s edict in which all arsenals shall produce Gew 88. As we’ve known today, Emperor’s decree never been fully implemented.
At the same time, Governors-General of Huguang, Zhang Zhidong, proposed to adopt a new small bore repeating rifle with a brand new caliber. From Feb through June 1899, he sent a series of letters and telegrams to Governors-General of Zhi’Li, Yu Lu, and Governors-General of Liangjiang, Liu Kunyi, talking about his idea of the new small bore rifle.
In his telegrams to Yulu and Liu from Feburary to April, he delineated 6.2m/m, 6.7m/m and 6.75m/m caliber.  He failed to persuade people to believe him  Liu did not get along well with Zhang, he did not react under various pretexts.
Zhang expressed three main points in aspect of technics: (1) light cartridge  (2) flat trajectory and higher muzzle velocity (3) costs of less materials. Besides, he insisted China should adopt an unique rifle caliber so that enemy cannot capture and use it. In the last year (1898) Germans occupied and established Qingdao as its far east colony. Zhang said “we do not need to use the same cartridge as Germans does.”
Zhang also refuted the allegation that the power of small caliber cartridge is weak by explaining that they had organised several tests showing as the rifle caliber decrease the penetration depth increase.

Boxer rebellion was broke out after 6 months. In August 1900, Emperor Guangxu fled out of Beijing. Any talk of new rifle would have to wait. A year later, China singed Boxer protocol in which China was banned from importing armaments for two years.
Until 1903, Zhang Zhidong wrote another memorial to the Emperor about restructure national arsenals under central government control. In the memorial Zhang recommended to adopt a caliber as same as 6.5 Arisaka. He also pointed out his envisioned 6.5 Chinese cartridge shall have a fatter and shorter case than Arisaka to make a difference.

Mauser and Mannlicher designed its own 6.8 Chinese cartridge. Chinese 6.8 m/m cartridge case was based on 7.9 Mauser which has same base dimension as 6.8 m/m. 60 m/m case has longer neck than 57 m/m case, but I have no idea what’s the purpose of it, probably for a better support of bullet seat or higher tolerance?
Rifles:
Haenel’s submission is a modified commercial Gew 88 rifle. No information of Mannlicher Schonauer. Somebody told me there’s one sample in Aberdeen Proving Ground museum. The receiver wall marked “Modell 1906”.
Mauser provided Modell 1904 commercial rifle. China bought a small quantity of Mod.1904 before adopting Mod.07. Chinese tested Mod.1903 in 1903 which placed in the second. They were familiar with its design and clearly known that “all Mauser rifles made before 1910 are variants of Mauser Mod.98.”
Chinese rifle designated by Mauser Company as Modell 1907 which bases on Mod.1904 but some details are close to Turkish Mod.1903. It has a long cocking piece just like Turkish Mod.03 which is 5mm longer than ordinary Mod.98 cocking piece. A full length hand guard. Mauser 1902 patent flat tangent sight. Tear drop shape bolt handle. T type short bayonet lug.
Mod.07 has two barrel lengths. One is longer 782 m/m barrel as request of Chinese Government, another one is more common 740 m/m barrel. Chinese received both samples and dislike the longer one so dropped it in mass production. I believe not much information from Mauser archives can tell us details about the longer barrel. Jon Speed did not know about it and a Chinese collector I personally know provided him with Chinese resources telling the origin of this longer barrel. I will discuss details of barrel length in the fourth part domestic production.

The Governors-General is the highest provincial official who supervises local Imperial Army, which means he is responsible of raising fund and of buying weapons. Ministry of Army helps him to do these works and coordinate with other government agencies such as Ministry of  Finance and Custom when they need to import weapons.

In June 1906, Ministry of Army designated rifle caliber of standard Imperial Army rifle as 6.8 m/m. However, this caliber was not “official”, because the debate was going on and never made a conclusion. That also means Chinese did not officially adopted Mod.07 as well.

The 1908 Chinese Contract. In May 1907, Yunnan Province begun to establish a new division, the 19th Division. Both Mannlicher Schonauer rifle (曼利夏石腦) in 6.8 Cal and Mauser Mod.07 in 6.8 Cal were shown tp Chinese. Mannlicher rifle is cheaper than Mauser, but the cartridge is different to the one used by Ludwig Loewe’s 6.8 cal Maxim gun and Mauser rifle. Chinese wanted the machine gun and rifle using same cartridge that helps Mauser wining the first contract including 3000 rifles and 450 carbines. The contract singed in late May. Two weeks later, Chinese intended to buy 3300 more rifles from Arnold Karberg & Co.
THE 1909 Chinese Contract. In the late October 1908, Commissioner Shen on behalf of the Governors-General again singed a contract for 1050 carbines and 700 Mauser pistols.
The 1910 Chinese Contract. In March 1909, XiLiang was appointed as Governors-General of DongSanSheng (東三省總督). He left Yunnan at the same month. In October 1909, XiLiang’s representative singed a contract with Arnhold, Karberg & Co. to purchase 3000 Mod.07 rifles and 3 million Spitzer cartridges.
The 1913 Chinese Contract. On June 13 1913, Carlowitz & Co and Arnhold, Karberg & Co. on behalf of Chinese Government singed a contract with DWM-Mauser Company to acquire 12000 rifle. The distributors’ document shows these rifles never been delivered to China. In October 1914, all rifles were taken over by German Government which re-chambered to 7.9 m/m and issued to German Army in 1914. 1913 contract Chinese Mod.07 is the most common Chinese contract Mod.07 rifle we can found in America today. There’s opinion that Qing Prince Zaitao’s visit to Mauser Oberndorf in 1910 helped to make this deal, but the Emperor had deposed 14 months earlier when the contract was singed.
OEWG supplied 4000 Mauser Mod.1908/10 to China in 1910-11. I have a Chinese file stated that Kwangtung Provincial troops bought 4000 Mauser rifles in 6.8 caliber in 1910 through the distributor Diapers & Co. Rifles were bought in two separate contracts each consists of 2000 rifles with bayonets and slings and 1 million cartridges. I have confidence to believe that Kwangtung’s rifles are the rifles which OEWG sold to China in 1910-11.