Overview
The ability to launch grenades from standard infantry rifles was a priority in post-World War Two Yugoslavia. Their M48 Mauser rifle had at least two grenade launching attachments designed for it in the 1950s: the M1951 ENERGA launcher from Liechtenstein, and the domestic M1960 Zastava launcher. Both launchers were spigot-style and attached to the muzzle with a steel strap and wing nut, similar to the American M7 design for the 1903 rifle. 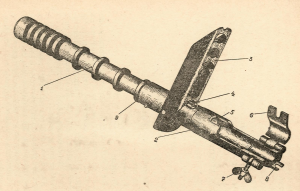 Grenade launching capabilities remained a priority in the 1960s when the Yugoslav People’s Army (JNA) began to consider semi-automatic arms to replace the M48. Because Yugoslavia was never part of the Communist Bloc, they were unable to receive technical assistance or licenses to produce SKS and AK rifles from the USSR. As a result, the locally produced SKS and AK rifles were reverse engineered and “redesigned” from the ground up, allowing the addition of whatever features they wanted. It should be recognized that despite starting the design process from scratch, it was not a trivial task to incorporate safe and durable grenade launching into the SKS and especially the AK platform.
Development/History
Unlike the grenade launching spigots for the M48 which were issued to a limited number of troops, launchers were built in on all M59/66 SKS rifles and the hardware included with every M70 rifle. Suddenly, almost every troop had the capability to launch grenades.

With the new generation of rifle grenades came new training grenades. Because the grenade itself is used as the front sight (see USE section for more information), the training grenade must have the same weight, balance, and dimensions to have identical flight characteristics with the live grenades. As the ENERGA grenade was replaced with a modernized anti-tank grenade, so was its accompanying training grenade. 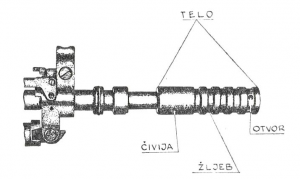 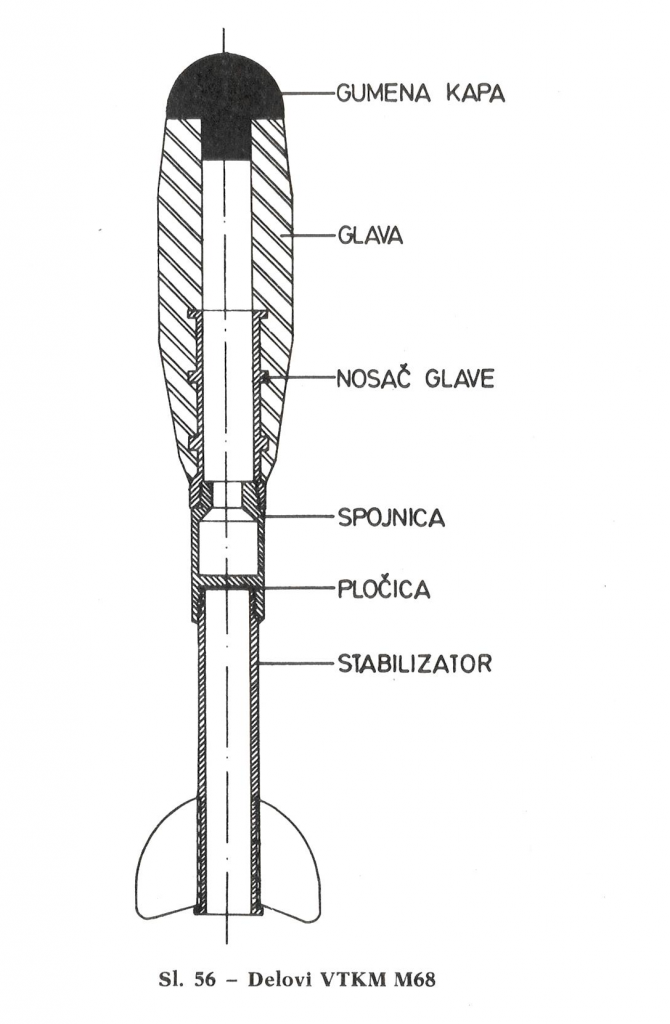 The VTKM M68 training grenade is intended to train troops on proper handling, and firing of anti-tank grenades.

Rubber cap: the aerodynamic piece of the grenade that is designed to absorb the impact when hitting the target thus extending the life of the piece. It is attached (non-removable) to the nylon head of the grenade.

Coupling: connects the head with the stabilizer via two different threads (so it cannot be reversed).

Stabilizer with plate: identical to live grenades. Works to guide the projectile. Consists of body, fins, steel plate, and securing ring. The body holds all the mentioned parts, and has threads at the top to connect to the coupling. The fins are made of plastic and number six in total. Then are instrumental for proper trajectory. The steel plate lines the inside of the body and is necessary to ensure the pressure and hot gasses are contained. The securing ring sits underneath the fins and works to keep the fins from sliding off the body during flight. 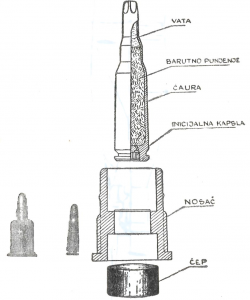 Cartridge: identical to the ones used with live grenades. Consists of case, primer, and powder charge (no bullet). Case and primer are identical to standard M67 ball ammunition. The case is closed by crimping the top and sealed with sealant. The primer is sealed to the cartridge case with varnish. The powder charge is 2,33g.

Plug: the cartridge is stored in a rubber and plastic plug. The plug is inserted into the base of the grenade for transport and storage.

Use
Sighting, firing, and general use of a rifle grenade does not differ from the M59/66 SKS and M70 AK series, except for the fact that the grenade launching spigot is removable from the M70. When using an M70, you must first remove the muzzle break from the barrel, then screw on the grenade spigot in its place.

The grenade sight must be lifted and locked into its vertical position. This shuts off the gas port so that the bolt is not unlocked after firing.

Acquire a grenade and remove the plug that holds its launching cartridge from its base. Affix the grenade to the launching spigot, making sure it seats all the way. Chamber the cartridge in the rifle, taking care to ensure you do not accidentally chamber a regular round. 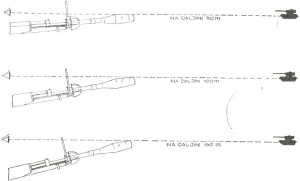 A diagram of how to aim using the tip of the grenade as the front sight. 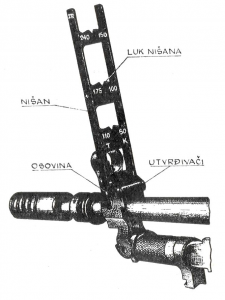 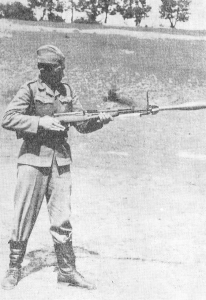 Firing the grenade is done from the “low ready” position, with the butt of the stock tucked underneath the arm. A grenade can be fired from any position: standing, sitting, kneeling, prone, from behind cover, etc. Never fire a grenade with the buttstock on the ground (mortar style), as this can damage the stock under recoil.

When firing practice grenades (and real grenades), always remove personnel from the vicinity of firing. Ensure there are no objects in the path of flight that could be hit before the grenade reaches the target.

Launchers can be fired through (with the grenade not in position) with regular ammunition.

Performance
The maximum range of the practice anti-tank grenade is 340 meters if launched at an angle of 45°. At 100 meters, acceptable deviation is 16 cm vertically and 12 cm horizontally.

Accuracy is tested by firing five rounds at a practice target 2x2m (covered with sackcloth) at 50m under calm meteorological conditions. The aiming point is a 20cm diameter black circle in the center of the target. If the rifle deviates greater than the allowed maximum for 50 meters (5 cm vertically and 4 cm horizontally), the corrected impact point is entered into the rifle’s technical booklet. The sight is not adjustable, so no changes can be made to the rifle to correct the error.

Yugoslavia used both Latin and Cyrillic alphabets, depending on region. The author’s two examples are both marked in Cyrillic, most likely because they were manufactured in a region of Yugoslavia that used Cyrillic.

Fins have been noted to be made of both white and black plastic.

Care
The M68 grenade is semi-durable and expected to be used several times with proper maintenance and spare parts. The grenade is expected to be shot onto soft, grassy terrain, and shot at mock targets. This keeps the life expectancy at multiple firings before damage occurs. It can be shot at real targets (tanks and vehicles) but the life expectancy is only one shot, although further shots can be made if no damage occurs. Firing onto rocky terrain almost guarantees damage, usually to the fins.

Grenades are to be inspected before, and after use. After firing:

Always check before firing to ensure the stabilizer is fully screwed on.

The Yugoslav People’s Army required practice grenades to be stored in complete and working condition. Incomplete or disassembled grenades were not acceptable. 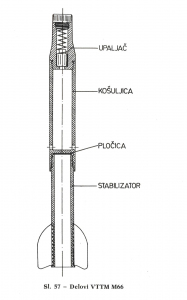 Differences with the VTTM (Vežbovna Tromblonska Trenutna Mina) M66 Practice Anti-Personnel Rifle Grenade
The other Yugoslavian practice grenade—the VTTM M66 grenade is largely similar to the M68 grenade. The identifiable difference is a separate profile that gives it the flight characteristics of TTM M60 and M60P1 Anti-personnel grenades. Because of different flight characteristics, the opposite (left) side of the grenade sights are used for aiming. It also includes an inertia driven fuse that releases smoke to designate the impact point. The fuse is single use, but replaceable at the tip of the grenade. The M66 Grenade can be fired without the smoke fuse.
Accessories
Various manuals cover the use, care, and performance of rifle grenades and the associated rifles. These include:

Grenade Launching Spigot: Required only for the M70 series rifle as the M59/66 launcher is built in. The spigot is not stored with the rifle; it carried separately in the magazine pouch.

Admittedly, the scope on this article is very narrow. There is room to expand on the history of rifle grenades in Yugoslavia, alternative Yugoslavian anti-tank weapons, rifle grenade techniques, use and performance of different grenades, etc. The goal is to continue writing about these topics and branch out into others as I come across more sources and expand my personal collection. Thanks for reading.

Military surplus with a focus on Yugoslavia, as well as pre and post Yugoslav countries.