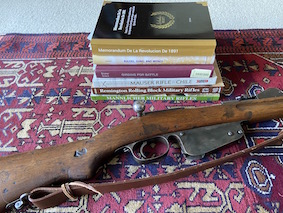 As collectors, if we know anything about the Chilean Civil war of 1891 it’s probably because we own one of the Mannlicher M.1886 rifles that were bought by the “Congressionalists” who were in revolt against the government of President Balmaceda. In fact the person who gave the “rebels” the most help was Balmaceda himself. In 1888 he had decreed that the army needed to purchase 100,000 modern rifles, as well as 100 cannons, 8000 sabres and 5000 carbines.  Perhaps Prussia had assumed that their influence would mean Chile would purchase rifles from them, rather than their traditional supplier, France. However, it was to Mannlicher in Steyr that the Chileans turned, and around 12,000 Mannlicher M.88 rifles were ordered, possibly from the firm of Auguste Schriever of Liege and Dusseldorf, who was the “Sole general agent…for the Repeating -Rifles of the Mannlicher system”.However, the rifles never made it into the hands of the President’s soldiers. In a stroke of great good fortune, 4500 Mannlicher rifles were seized on January 8th 1891 by the Congressionalists from the German steamship “Cleopatra” as it lay at anchor in Valpariso.

As the Civil War progressed the Congressionalist forces were desperate for arms. The rifles they seized back in January were running out of ammunition, and they needed military supplies of all sorts, from saddles to coal to cannon.  What they couldn’t take had to be bought on the open market. To that end they dispatched purchasing agents to Europe and America, scouring the market for whatever they could get.  The purchasing efforts were coordinated by the Chilean Minister in London, Augustin Ross, and what follows is based on the account of the task he wrote to his boss, Waldo Silva, who was Vice President of the Chilean Senate and one of the leaders of the revolt against Balmaceda.

So how much does a revolution cost then?

The rebels were also fortunate in that they had captured the north of the country, rich in the nitrates that the world wanted for fertiliser and explosives production – so they had money.
The document shows that between April-May and September of 1891 there were five shipments of military hardware and along with Gatling guns and light artillery it’s clear that the rebels desperately needed rifles and ammunition.

The first, on the steamship “Itata”, carried 5,000 Remington-Lee rifles in .43 Spanish caliber along with 2,000,000 rounds of ammunition for the same. These were purchased form Schuyler, Hartley and Graham. This shipment was the only one not from Europe, sailing as it did from San Diego in California. The records do not split out the cost of rifles and ammunition but the whole shipment (paid for in instalments) cost £24,400.  Sadly the rifles never reached the hands of the Congressionalists, as they were purchased against the wishes of the US government who made a failed effort to intercept the ship en route. The ship was finally surrendered to an international naval force in the Chilean port of Iquique and returned with its cargo to the US.  The rest came from Europe, especially the ports of Antwerp and Dunkirk.

The third shipment on the yacht “Carioca” carried gunpowder.

The final shipment, that on the steamship “Landana”, didn’t arrive until the war was over and carried more Winchester carbines and ammunition as well as ammunition for the Gras and another 2,000,000 rounds of 8mm Mannlicher ammunition. The price of this had gone up a little, to Fr 143/1000.

So it was on the “Stanmore” that my M.1886 rifle arrived in Chile. In those desperate times the ship did not immediately dock on the mainland but was instructed to head for San Ambrosio isIand, one of a small group of isolated islands 530 miles off the coast. The islands are known as the “Islas Desventuradas” which can be translated as “The unfortunate islands”. Not an auspicious start to the rifles career in South America.  Augustin Ross and his other agents had achieved much. They had managed to provide the Congressionalists with almost all of the the supplies that had been requested, despite the need to keep their activities a secret from agents of the Balmaceda government and delays caused by a lack of clarity – or excess of brevity – (“lacónicas”) in the instructions they received by telegraph from Iquique.

And the cost of this revolution?

Interested in Military Rifles and the Arms Trade of the late Nineteenth Century. Loves the smell of archives in the morning.