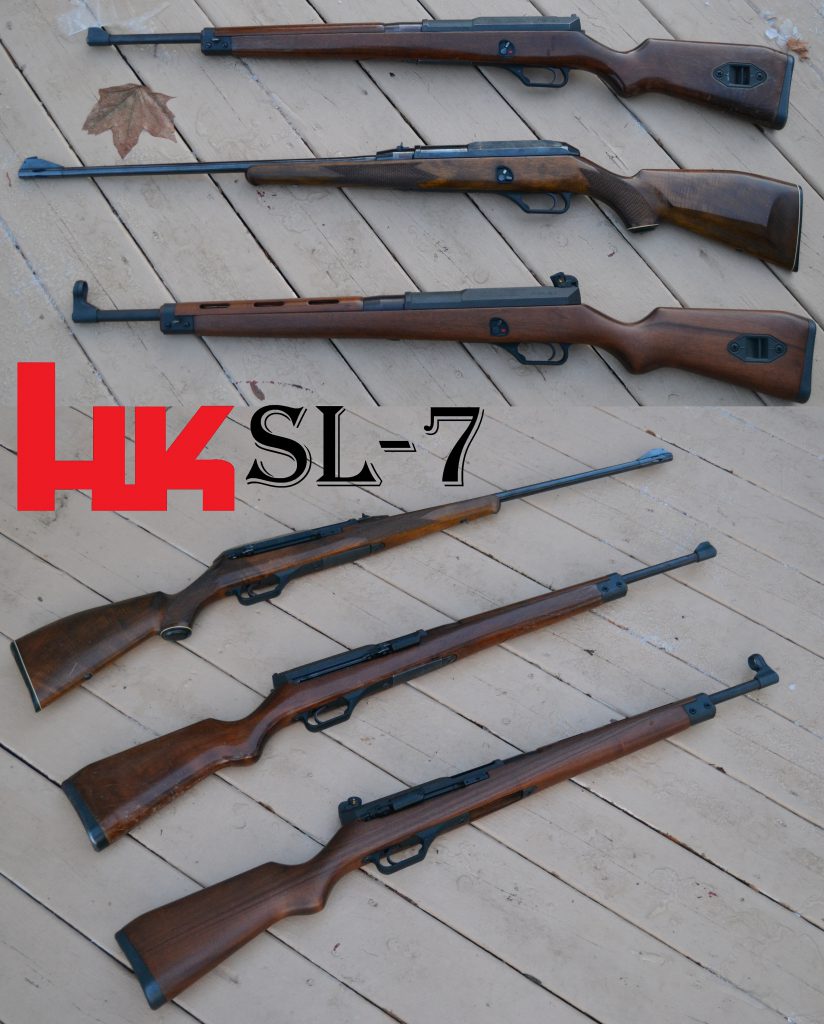 Just over 10 years after the first roller delayed battle rifle entered service, Heckler and Koch decided to create an autoloading hunter’s rifle for the civilian market. Luckily, the CETME and G3 actions were being produced in massive numbers and it was just a matter of creating a new set of furniture for the civilian market in which to place the same recoil mechanism.

Heckler and Koch model SL-7 was just that: a stated hunting rifle utilising the exact same roller delay operating system as the CETME and G3. This more modern autoloader models itself quite close to the original Gewehr 43 in aesthetics with a similar front nosecap keeping the upper hand guard pressed into the receiver. With available 10 round magazine, an untrained eye could quite easily mistake the two.

Later in production, HK created the HK 770 which are hunting variants using a traditional, unmistakable European rifle stock making more use of the lack of front charging handle placement to completely remove all the front wood allowing for a free floated barrel. Later on, HK added the SL-6 which was a full wood version of the SL-7 but in .223 and the HK940 which was a sporter style HK 770 but in .30-06 instead.

The biggest and most notable changes that HK did when creating a new receiver and upper for the SL-7 series rifles was the relocation of the charging handle backwards and on the right side of the receiver and creating an entirely new magazine. The charging handle relocation made the rifle significantly thinner and much less unwieldy and shaved off over one lb from the dry weight. The bolt does not lock open on the final round but can be locked back to the rear similar to the G3 locking mechanism but releasable with the user’s right thumb instead. The magazine change opted instead for a double feed 3 and 10 round magazine built entirely of steel. This also allowed the Cartridge Overall Length (COAL) to be increased from a paltry 2.820 inches (7.16 cm) for the G3 / 91 magazines to over 2.940 inches (7.45 cm) allowing the use of much longer and heavier .308 rounds.

The magazine upgrade along with a significantly better trigger allows this rifle to get sub MOA at 100 yards with appropriate ammo (as long as you do your job). However, the shorter receiver and metal backing plate without a large stock mounted buffer means the rifle suffers a similar issue with the Gewehr-43 in that the bolt recoils quite hard into the rear bolt stop and receiver. HK seemed to have rectified this by placing a pretty hard buffer at the rear but as this is a blowback rifle (despite being roller delayed), it would be advised to watch the firearm’s usage using any hot handloads. Generally, one would want to avoid grainage over 168 due to the twist rate anyway as the SL-7 and all variants use the same 1:11 polygonal twist rate barrel hydraulic pressed into the receiver with varying barrel lengths depending on factory specifications. HK also did a fantastic job with the quick detach, upper claw mounts for a scope providing both a lever release and a two screw release option. I’ve personally found a benefit using the SL-7 being the only one shooting PRS who can field swap scopes and hold a zero in the middle of a match!

With the last batch allegedly being made in the early 1990s, HK largely abandoned the production of these rifles allowing them to be quite collectible and obscure rifles today. No exact figures would exist for total number produced but these have quite a niche within certain states and countries where assault style rifles may have or receive a potential prohibition.