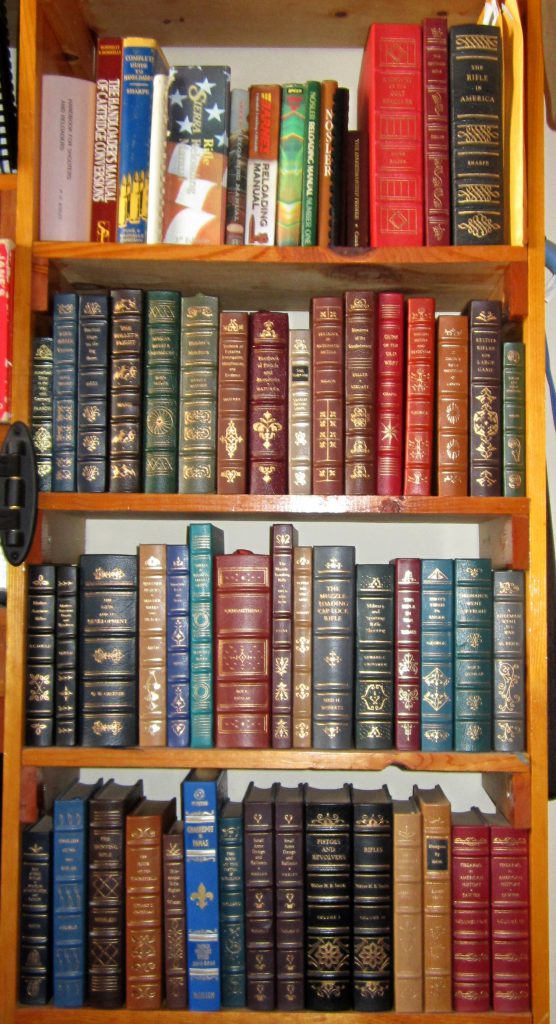 Back in the mid-1990s, I received an invitation by the NRA to join a new book club. The club would be publishing quality facsimile reprints (acid-free paper, sewn bindings and leather covers) of ‘classic’ works related to firearms design and history, hunting, military smallarms, collecting and so forth. By joining, I would periodically (I forget how often) receive each new title as it was printed, on approval with the option to either keep and pay a fixed price or return it within a set number of days. It sounded good to me so I signed up.

I should back up a moment to mention that I am a bit of a book snob. I took a elective course in bookbinding and worked at my university library’s book repair shop as a part-time student job for four years. This gave me an appreciation for the difference between a well-made book and the more typical perfect-bound throwaways on acidic paper. I still own and use a pH pen to verify book paper acidity.

I believe the first Firearms Classics title I received was Edward Chapel’s Gun Collecting. I was impressed: the title page tested acid-neutral, and the pages were bound using the preferred sewn signature technique. The edges were gilded, which I can take or leave, and the edition included an attached silk ribbon bookmark and silk moire end-papers. The edition statement at the end of the text gave the supplier of the leather used for the cover. Frankly, I prefer plain but more durable buckram cloth covers over leather, but I know I’m in the minority on this. As for the actual text, there was a frontispiece and introduction in a tasteful modern typeface, followed by a well-reproduced facsimile of the original contents.

This pattern was faithfully followed throughout the series, with different colored leather and decorations for each cover. The quality of the reproduced contents varied somewhat according to the age of the original material, but I could tell that considerable care had been taken to make each edition as attractive as possible.

I will admit that I did not immediately care for the subject of every single book I received, but over the decade I continued to receive books I never returned any book I received. The series editors had taken great care in selecting material to reprint, and I figured every volume was worth having.

I don’t recall what year I ended my membership in the book club, but I remember that it wasn’t by choice — I had one of those periods where I had to economize, and stuff like food and car repairs took higher priority in my life than books for a time. Later I bought several addition titles I’d missed via Amazon.com. I believe the series is no longer in print, but I don’t know any further details.

For more information information about the Firearms Classics Library, checkout these links: