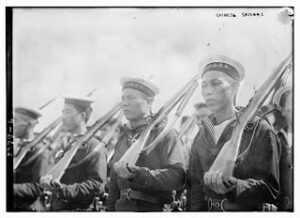 The Mauser Archive does not show any records of selling 1893/95 rifle to China. But China must obtain a number of such models from other sources. From Qing government archives, I am able to find several documents related to purchasing Mauser Model 1893/95.

Another Model 1893/95 contract was between Telge & Co and General Yi Gu dated 1904. General Yi Gu ordered 600 pieces of Mauser 1893 rifle as well as 250 pieces of Cavalry carbines in 7m/m. The consignments were delivered in Tiansien, Chinese delegate refused to take the delivery since the rifles and carbines were used ones. In the end, Chinese took only 100 rifles and required a refund or exchange.

Prior to General Yi Gu’s order, in the same year, Governor of Shanxi Province purchased 2500 Mauser 1893 rifles and 500 carbines from Telge & Co, which also were found being used ones and rejected by Chinese.

Besides these contracts information, I also have various Chinese records of issuing so called “Chilean Mauser rifle” to some units.

Jiangnan Arsenal had produced Chilean smokeless powder rifle cartridge no later than 1903. In the product catalog, Jiangnan Arsenal listed a “1897 pattern” Chilean cartridge which has 7 m/m-0.282in caliber with overall length of 3.05 inch. It implies that China imported a substantial number of Model 1895 Chilean rifle so large that Chinese would like to produce ammunition domestically.

FN sold 10000 rifles to China in 1894. Unfortunaly, the FN archives does not have details on this contract rifle. Mr.Vanderlinden’s book said it’s FN Brazilian Model 1894 which were chambered in 7 m/m. China even imported some Mauser rifle in Belgian 7.65 m/m caliber which I will discuss in another article.