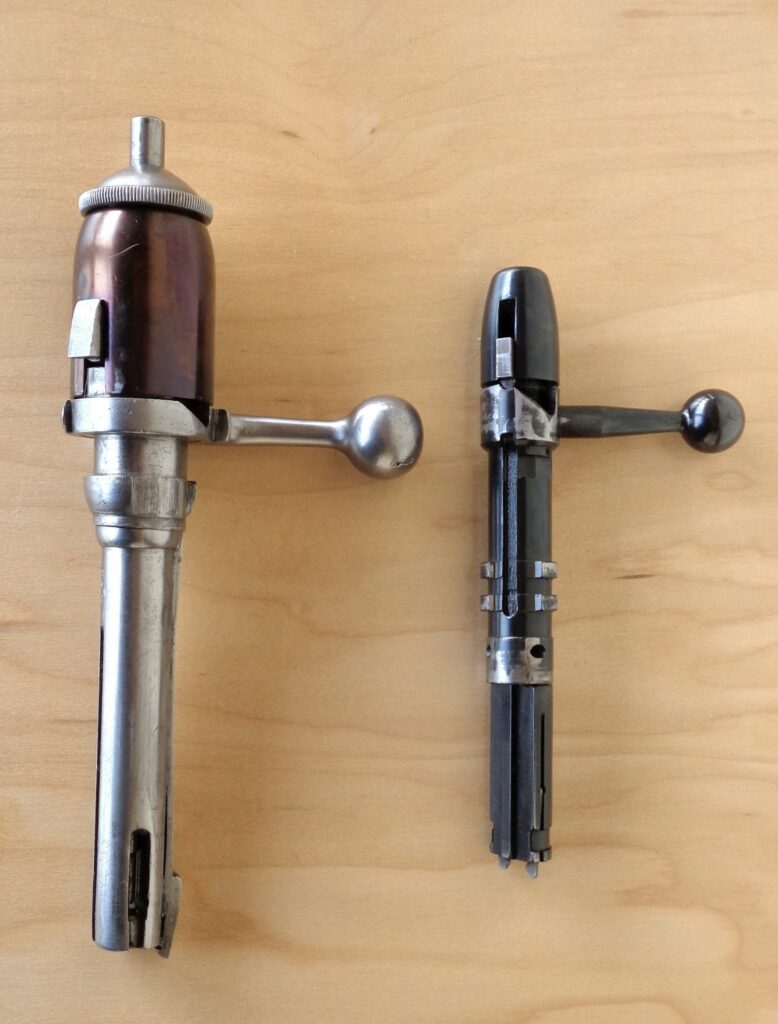 I recently purchased a used Remington 580 single-shot .22 rimfire rifle. It has an excellent bore but is a fixer-upper in several other respects: the trigger was frozen (solidified lubricant as it turned out), the stock was incompletely refinished and the threaded boss on the underside of the loading platform was sheared off.

When I removed the Remington’s bolt prior to cleaning the inside of the trigger housing, I was struck by a number of similarities to my Swiss 1870 Cadet rifle.

Here’s a list of the features shared by both:

Differences between the rifles include the Remington’s manual safety/bolt stop and improved dual extractors. For its part, the Vetterli featured dual firing pins for more reliable ignition, and a rear projection that acts as a cocking indicator. The Remington’s trigger assembly is in an aluminum housing attached to the receiver; Vetterli’s trigger is attached to the triggerguard. The Remington barrel is pinned to the receiver, the Vetterli’s threaded. The method for mating the barreled action to the stock is very different on the two rifles.

Symmetrical rear locking lugs was the feature that really grabbed my attention.  When the Vetterli was new, bolt action single shot rifles chambered for blackpowder cartridges were becoming relatively common. However, the breech of the French Gras, Mauser 1871, Dutch Beaumont and Russian Berdan II all locked up on the root of the bolt handle. Most .22 rimfire rifles still lockup this way. Symmetrical locking lugs made both the Vetterli and Remington unusual in their respective classes. The 580 features three double lugs, making it arguably the strongest locking system found on a .22 rimfire action. A number of 580 actions have been modified to accept higher-pressure centerfire cartridges such as .32 ACP and .32 H&R.

In both rifles, the locking lugs rotate with the bolt handle while the front portion of the bolt does not rotate relative to the action. Both also feature a generally similar conical sheet metal cover at the rear of the bolt.

According to the factory codes stamped on its barrel, the Remington was manufactured in 1972. The Vetterli was made at least 100 years earlier, sometime between 1870 and ’72; despite the passage of time, I’m not convinced that the Remington design is a significant improvement over its uncredited predecessor.