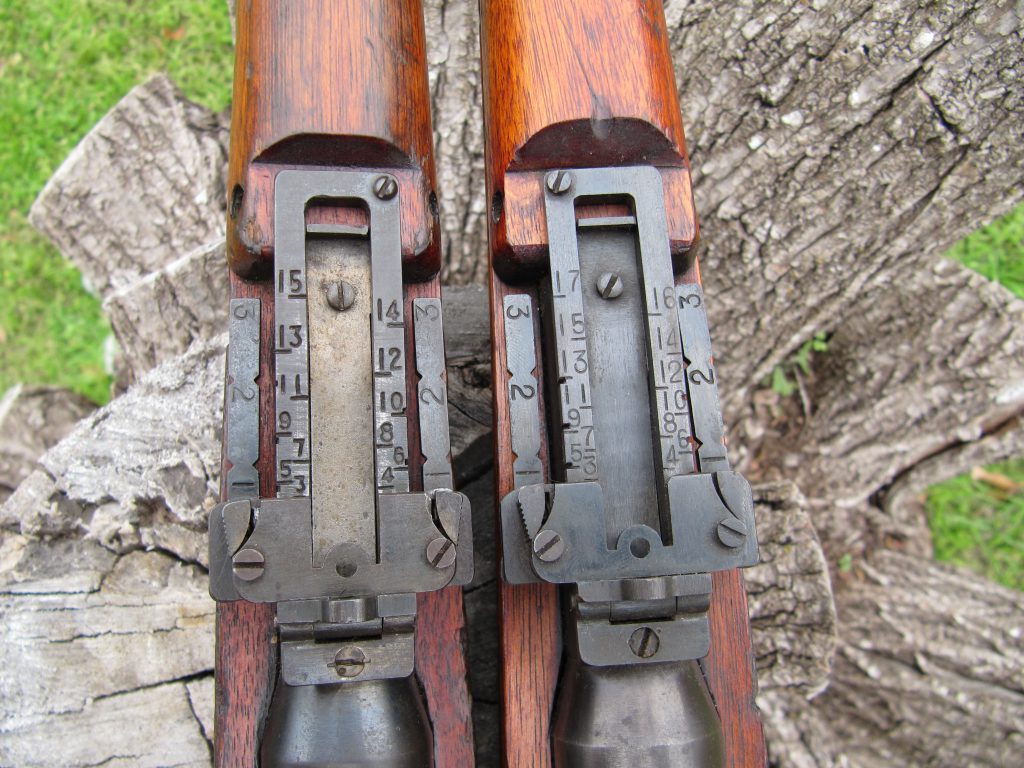 When the Japanese decided to build a rifle on on their new 7.7 rimless round they at first decided on a long infantry version with an 800mm (31.5 inches) length barrel just as the older Type 38 was. Production started in mid-1940 at the Nagoya Arsenal and at the commercial firm Toyo Kogyo in Hiroshima, which was a subcontracted out by Kokura Arsenal. Ultimately the Type 99 long rifle designed was shelved in early 1941 in favor of the Type 99 short rifle design with just over 8,000 rifles produced at Nagoya Arsenal and about 30,000 made at Toyo Kogyo. Nagoya Arsenal did not use a series number, but Toyo Kogyo was assigned the 35th series (テ). Note: Toyo Kogyo also made “last ditch” short rifles in the 35th series late in WWII. They are not related.

Type 99 long rifles basically a mix between a Type 38 rifle and a Type 99 short rifle. The stocks are similar to the Type 38 with a short handguard and exposed barrel. The sling swivels are mounted on the bottom. Both long and short rifles had monopods, but the long rifles are slightly different in being longer and with having one spring on each side instead of the spring wrapping around the monopod base. The rear sight has anti-aircraft sight wings like the short rifle would have later on, but it has notches on both the bottom and top and at the 200 and 300 knot positions, while the short rifle have a notch on only the bottom at the 200 knot position. For whatever reason Toyo Kogyo have their sights up to 1,700 meters, while Nagoya only went up to 1,500 meters. The bores are all chrome lined as are the bolt faces, although Toyo Kogyo only chromed the center of the bolt face with the rest blued. The cleaning rods are similar to the late short rifle, but it is longer in length to match the barrel. Both Nagoya and Toyo Kogyo originally had their springs and their triggers strawed, while both later moved onto just bluing those small parts as a time saver. Toyo Kogyo matched their rifles with a 3 digit assembly number unrelated to the serial number, while Nagoya matched the rifle with the last 3 digits of the serial number.

These rifles are not common to find (and rare to find Nagoya examples) and when they are found they are almost always missing their unique monopods as well as their dust covers with their AA sight wings also commonly missing. Be careful when you find one with a monopod attached. Reproductions/fakes are out there. If the monopod is short then it’s not the correct monopod. It should go to almost the front barrel band/bayonet lug screw.