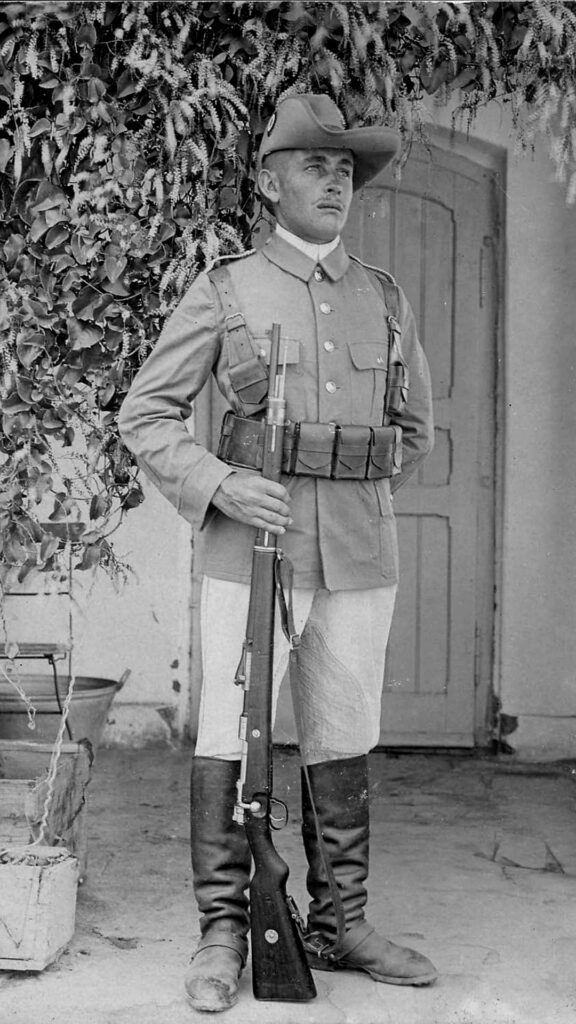 This article is just like my last one but with me slowly writing a book about the subject. I have discovered new findings and new information retaining to the subject. Thank you.

The Schutztruppengewehr 1898 was mainly used by Schutztruppen of South West Africa and saw limited use in Kameroon and East Africa.

Origins of the Schutztruppengewehr 1898
During the Herero and Nama Rebellion of 1904-1908 saw the formation of a volunteer force of 19,000 strong to put down the Herero Rebellion. The new Schutztruppen force was divided into two field regiments. With Battle of Waterberg (Battle of Ohamakari) took place on August 11, 1904 and Nama uprising finally put down in 1907. The two Schutztruppen field regiment returned back to Germany but not with there arms. Joseph Port wrote some letters in the 1950s about the life and the weapons of the Schutztruppe on DSW. According to Port the bolts were bent in 1908 in Windhuk. It was done due to the fact that the rifle would now fit in leather saddle holster much better.

Schutztruppengewehr 1898 with Landespolizei
The Landespolizei was comprised and made above professional police officers from mainland Germany. They were armed mainly with pistols. The 1883 der Revolver and Roth-Sauer Pistol were both in common use, the Luger P08 was also issued sometime after 1912. Rifles and carbines were sometimes carried. Many troops would carry a copy of there Dienstbuch or Service book.
Here is an example of Karl Füchsel (1883-1960) Dienstbuch – Service book.
Polizeisergeant Füchsel owns:
S. Gewehr Nr. LP 569
(Fabrik Nr 6212, Spandau 1900);
Roth-Sauer-Pistole LP 90
(Fabrik Nr 396)
July, 1 1912
Records in “Unter dem Kreuz des Südens” shows that the Landespolizei had 853 Schutztruppengewehr 1898 issued to them in German SouthWest Africa.

Schutztruppengewehr 1898 details
Length:49.20″; Weight: 9.0lbs.; Barrel: 29.13″; Caliber: 7.92x57mm; Rifling: 4-groove, r/hand; Operation: Turnbolt action; Feed: 5-round staggered column, flush, box magazine; Sights: V-notch rear sight. Lange Visier rear sight adjustable from 200 meters to 2000 meters. Average cost to make: 54DM
The Schutztruppe did not get its arms from the factories but from army stocks. With Spandau being the most common. Along with Erfurt and Mauser Oberndorf.

Unit disc markings from Southwest Africa:
1.F.R./2.F.R. = 1./2.Feld-Regiment.  This unit disbanded after the Herero Rebellion was put down.
KS = Kaiserliche Schutztruppe
K.S. (no) = DSWA
L.P. (no.) = Landespolizei DSWA
K.G.P. (no.)=Kaiserliches Gouvernement Polizei and seem to be used in 1905-07.

1907 updates and Modifications:
Form the former Schutztruppe gunsmith Joseph Port who was in charge when the bending was done. Joseph Port wrote some letters in the 1950s about the life and the weapons of the Schutztruppe on DSW.
According to Mister Port the bolt was bent in 1908 in Windhuk.The bolts were bent in after the Herero Rebellion of 1904-07 was over. It was done due to the Schutztruppen mounted units. Acted in a role more like dragoons/mounted infantry and not true cavalry. The rifle with the bent bolt would now fit the leather saddle holster much better. Port also wrote in one of his letters that the bending was a mistake. The troops didn’t liked the bent bolt on Schutztruppengehr 98. It was much harder and slower to work with then a regular straight G98 bolt. It Port also remembered that the Kaiserliche Schutztruppe didn’t used the new S-Catridge until the end of the Hottentotten war in 1907. Directly after the war they would upgrade their rifles to the new 8×57 IS.

S PATRONE IN THE COLONIES
In German East Africa the European [troops] are armed with our modern magazine rifles for S-ammunition…the [Askaris] and Police are in process of being gradually rearmed with S-ammunition capable modern weapons. In Kamerun the Europeans and coloreds soldiers of the Schutztruppe and Police were equipped with the Kar 98 version not specified. Except for the two companies in the Muslim area which are already equipped with Schutztruppengewehr 1898 but for which gradual replacement with Karabiner 98s is proposed. The Police in German New Guinea have in part modern repeaters for S ammunition, in part older weapons which are to be replaced in the forseeable future.
To this I add that there are specimens of Kar 98As (Not Kar 98a) known with unit marks P.T. (no.) = Polizeitruppe Togo; I don’t have any information on whether they are in the Patrone M88 or S Patrone.
Ammunition supplied in watertight (soldered shut) cases; artillery ammo loaded and ready to shoot in the case (but not fused). Ammo packed in loads suitable for carriers: 25-30 kg. In the case of 11mm ammo this meant crates of about 500 rnds. and for 8mm 675 rnds; MG and artillery ammo carried on wagons (usually ox-drawn) or horses. I add that crates of unopened 8mm still survived in South Africa as late as the middle 1980s and may still be there.
Each rifle that has been updated with the S patronne ammunition. Will have an “S” somewhere between the rear sight and receiver. There will also be an “S” at the very end of the unit mark on the unit disc.

Known examples as of 2021.
Colonial Gewehr 1898 used by the Kaiserliche Schutztruppe.
Mauser Oberndorf
1899/WMO/6735/K.S.10228.S(few details-unknown if stock is original to the receiver)