My colleague Kristóf Nagy has authored an excellent article on the Frommer Stop pistol for The Hoplite.

Rudolf Frommer and his frequently unique firearms designs have been more or less forgotten today, but the impact of his work is still felt in our modern world. Born on 4 August 1868 in Budapest, Frommer was soon to be recognised as an energetic rising star in the Hungarian firearms industry. He did not choose to follow the typical educational path of a firearms designer; instead of becoming an engineer, he studied at the Budapest Academy of Economics before being hired by the Hitel Bank investment bank. As a portfolio manager, he was tasked with overseeing investments made by his employer. One of these was the bank’s loans to financially stabilise the firearms manufacturer Fegyver és Gépgyár, the predecessor of the later, state-run FÉG arms factory. 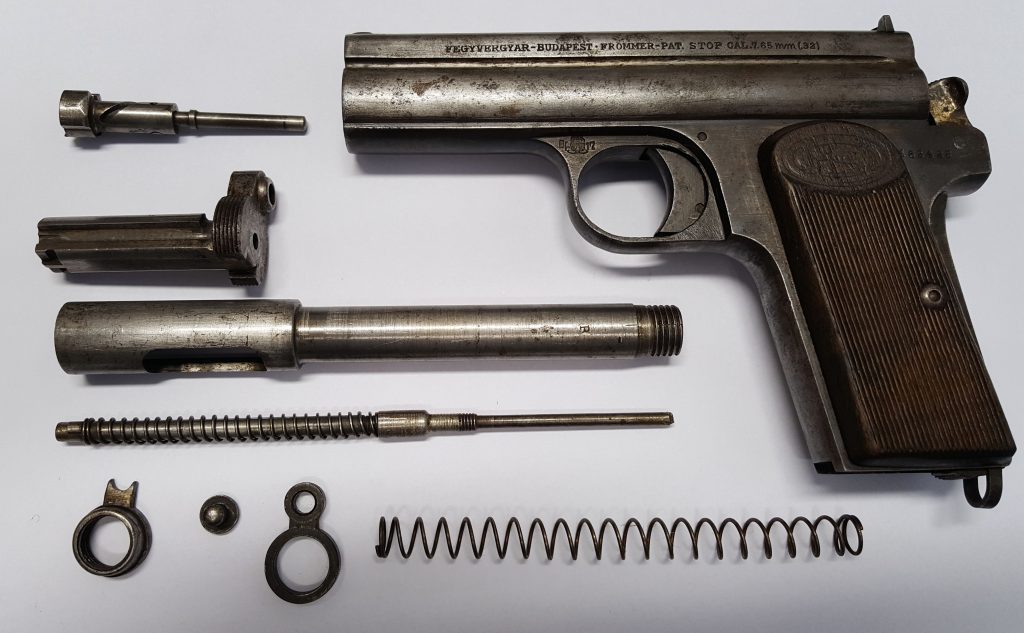 The Frommer Stop was the first self-loading pistol that was entirely designed and mass-produced in Hungary. Fielded in 1912 as the 12 M. pisztoly, it became the sole sidearm of all Hungarian armed services over time. But it was far from Rudolf Frommer’s first attempt at a self-loading pistol design. In 1901, Frommer applied for a patent for a handgun that would become the Model 1901. This design featured a fixed magazine inside the pistol grip, and had to be loaded via a charger (‘stripper clip’). Only a small pre-production series of 200 pistols was manufactured and, although these were internationally distributed for testing, it never generated enough interest to be adopted by any country. … Finally, in 1911, the long-awaited breakthrough was achieved. Officially adopted as the Model 12 pistol, Frommer’s handgun became a long-standing item amongst Fegyver és Gépgyár’s offerings, manufactured in .32 ACP and .380 ACP. Besides governmental contracts, the pistol also saw remarkable success in the civilian market. Especially popular was the shorter version, known as the Frommer Baby.

N.R. Jenzen-Jones is an arms and munitions intelligence specialist focusing on current and recent conflicts and weapons technologies. He is the Director of Armament Research Services (ARES), the Director of Research for Headstamp Publishing, and holds Visiting Fellowships at the Centre for the Reduction of Firearms Crime, Trafficking and Terrorism at the University of Northampton, and in the School of Law, Policing and Forensics at the University of Staffordshire. He serves in consultancy roles with a number of prominent organisations in the field, and has produced extensive research and analysis on a range of small arms and light weapons (SALW) and small- and medium-calibre ammunition issues. Mr. Jenzen-Jones has also provided technical assessments of incendiary weapons, cluster munitions, indirect-fire artillery weapons, and conventional arms proliferation. He maintains a broad focus on how weapon systems are selected, acquired, stockpiled, and employed.