The book K98k have discussed the rifle, here’s research of its history how did it come to China.

The Second Sino-Japanese War outbroke on July 7 1937. At this point, China domestic rifle production amounted to 80000 a year. Huge loss of weapons and machinery forced China to acquire extra small arms from Europe.

After tens of thousands rifles orders had been put on FN and ZB, China came to Mauser Company. The first K98k Chinese contract negotiation commenced in February 1938. The contract was allegedly signed in March between the head of Chinese Commercial Representative Office in Berlin, Tan Boyu (商務專員處 專員譚伯羽), and Mauser Company.

One month later, Tan Boyu approached to Mauser Company intending for a second batch of 50000 rifles.

However, the deteriorated relation between Germany and China barred the possibility of further supplement of arms to China. On May 3, Tan Boyu received a Mauser Company delegate who informed Tan that 5000 rifles scheduled in May would not be delivered on time due of the embargo. And Mauser Company unlikely to take another 50000 rifles order for China. The intention of the contract was canceled on July 11 by Chinese. Nevertheless, this is not the end of Chinese K98k contract story.

The office attached to Chinese Embassy mainly conducted military armaments trades in Europe on behalf of Nationalist Government. Tan Boya was the head of the office since 1933. The office handled many Nationalists Government armaments orders including Mauser pistols, rifles.

On April 28 Herman Goring ordered a cease of transportation of Chinese ordered armaments including HAPRO contracts. On May 3, NAZI government declared formal embargo. German Government prohibited German companies from further shipments of weapons to China. However, they can divert the shipments to foreign agencies.

HAPRO was not involved into many Chinese small arms deals. This program mostly handled heavy weapons. As the end of May 1938, Handelsgesellschaft fuer Import und Export, Berman. (IMEX) had shipped 30000 Chinese K98k. Then Chinese diverted their shipments to a Finnish company called Messrs. DAHLBERG and HILBERT, Q.Y Helsinki whose agency in Hamburg being IMEX.

On July 8, Tan Boyu reported Finnish ship Hansrickmers left Hamburg with 5000 rifles. On July 11, Sheng Pingchen reported the last 15000 rifles would be shipped on Aug 1. Thought the last shipment arrival time is unclear, but a series of Weekly Report of Weapons Importation show all 1938 Chinese K98k were delivered and arrived in China.

Interestingly, prior to Feb 1938 contract, on Dec 8 1937, General Li Tsung-jen reported he had bought 10000 rifles from Mauser Company through distributor Groupe Chine. And Chinese Foreign Ministry issued transportation passport Xuan Zi No.96 (玄字96號). On Dec 31, he reported additional 15000 Mauser Company rifles through Groupe Chine. These provincial government orders were not included in the table prepared by Nationalist Gov.

Groupe Chine handled many FN Chinese contracts. Chinese documents were not always precise on terminology things such as the model, manufacturer etc. The dealer might belie the source of rifle to buyer.

A setback of Germany-Japan relationship occurred during late 1938 to early 1939. NAZI government failed on signing the Economy cooperation protocol with Japan. Japanese refused to cede on Germany’s requirement of Most Favored Nation in Northern China. China sized this last chance ordered additional 50000 rifles from Mauser Company.

Boixo Frères offered “off the shelf” Model 24 for CIF 4 pounds 18 schillings each. China could make the payment with raw materials.

FN offered Model 24 for CIF 4 pounds 16 schillings each. China could pay the factory with tin ore. FN would deliver 8000 rifles each month starting on January 1939 and conclude the deal within 12 months.

ZB offered Model 24 for FOB 4 pounds 19 schillings. The factory had 70,000 rifles in stock that can be delivered immediately, the rest 30,000 would be delivered by December.

Siemssen & Co. offered “Model 1937” rifle directly from German military force at a price of CIF 5 pounds (shipped to Yangon, Burma). The payment would be handled by HAPRO.

Tan Boyu telegraphed Chinese Minister of Finance H.H Kung that the unit price of Mauser Company rifle including 1000 cartridges was only 7 pounds 4 schillings.

On January 11 1939, Chinese Central Bank representative in Hongkong received further instruction from H.H Kung that ZB and Siamese & Co offers were excluded from list because of their uncompetitive price.

Suddenly Siamese & Co had the lead in this business. On January 19, Minister of Finance permitted Chinese delegates in Hongkong singing the contract with Siemssen & Co for 50000 rifles.

As previously agreed, the down payment of 300,000 US dollars was paid by reallocated Chinese government account of the undone contract of airplanes and the rest payments would be handled by HAPRO Company.

Siamese & Co informed Tan Boyu that Chinese inspectors were probated from inspecting the rifles at scene according to an order from NAZI government. Tan managed to acquire permission to let Chinese officials to inspect rifles covertly. And the delivery times eventually arranged on March and April regarding the urgency of Chinese government.

On March 23, Chinese embassy in Berlin issued a passport to the contract of 50000 “Original Mauser Infantry Rifle Model 1937 Cal.7.9.”

The 1939 shipments in this document belong to 1939 Chinese contract. In British custom records, 49960 rifles arrived in Yangon between May and July. It takes 4 to 8 weeks from Hamburg to designated port. 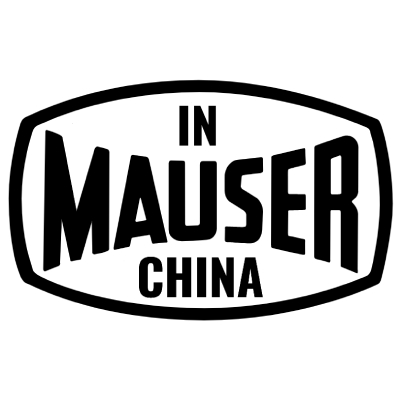 The first sale to China of Mauser Oberbendorf

What to do with those STIMMY BUCKS???

The Colt 45 of Bat Masterson