The Model 1893 Exposed Hammer Slide-Action Repeating Shotgun was the second John M. Browning designed and patented shotgun manufactured by the Winchester Repeating Arms Company. Production of the Model 1893 began in the spring of 1893, with serial numbers 1– 22 passing through the Polishing Room on May 2nd, 1893. The Model 1893 was formally introduced to the shooting public almost a full year later in the April 1894 Catalog No. 52.

The Model 1893 Slide-Action Shotgun was designed and chambered for the 12 gauge, 2⅝ – inch black powder shell only (identical to the Model 1887), and with a 30 or 32 – inch rolled steel, Full choke barrel as standard. Numerous options and special order features were available, and they will be discussed in further detail later in this article.

One of the primary reasons I decided to research and write this article was to dispel several urban myths that persist about the Model 1893 and to correct a fair amount of inaccurate information that has been published about this particular model in the past. So with that in mind, let’s begin:

OK, let’s get back to the verifiable production history. John M. Browning and his brother Matthew S. Browning were granted Patent No. 441,390 for the Model 1893 on November 25th, 1890.

As listed in the April 1894 Catalog No. 52, there were just two variations cataloged: (1) the Repeating Shotgun, and (2) the Fancy Repeating Shotgun. Shortly after production began, a Riot Gun was manufactured, but it was never officially listed in any of the ensuing catalogs. Still later, a Trap Gun and a Pigeon Gun were added, but again, they were never cataloged. They are very rarely found today.

During the 4+ year production run, a number of design changes were made, and with them, Winchester changed the serial number marking to include an “A” above the serial number, and later a “B”. The serial number transition point from no letter to the letter “A” was in the 13800 – 14700 range. The transition from the “A” to a “B” was in the 23550 – 24600 serial range. Very near the end of the production, a final design or production change was made, and a “star” symbol was added. This change occurred near s/n 30000, and it was common until the end of production.

In my ongoing research of the Model 1893, I have discovered that at least three guns were modified by Winchester before they originally shipped or during an R&R, that have both an “A” and a “B” marked on them. All three were originally “A” series guns, but were later altered and have the “B” added above the “A” or below the serial number. 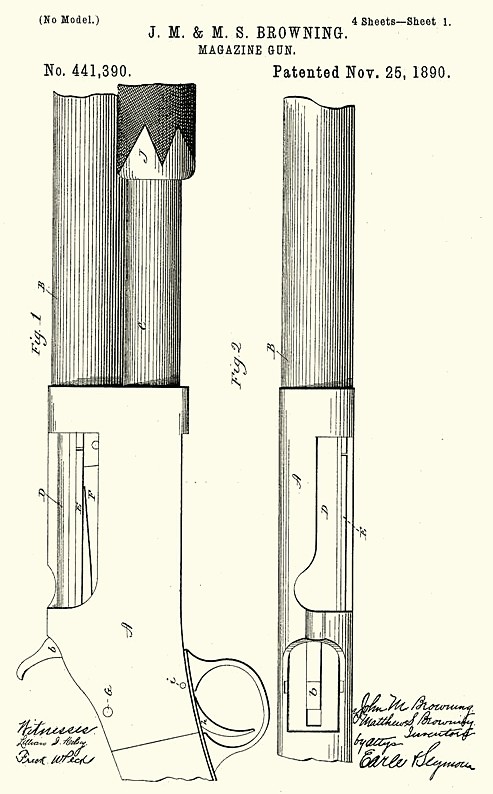 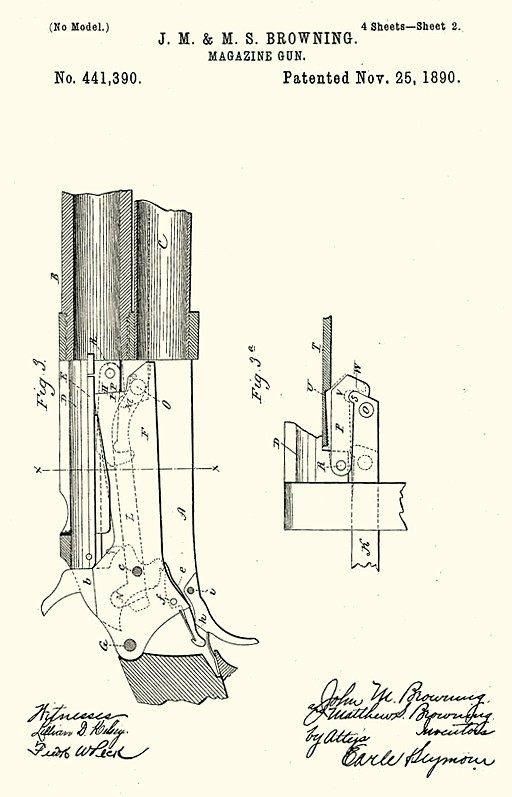 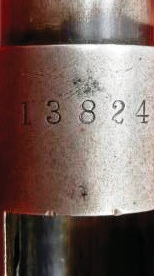 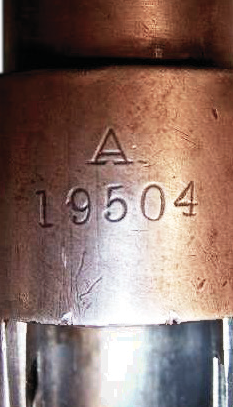 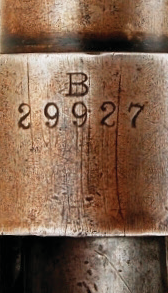 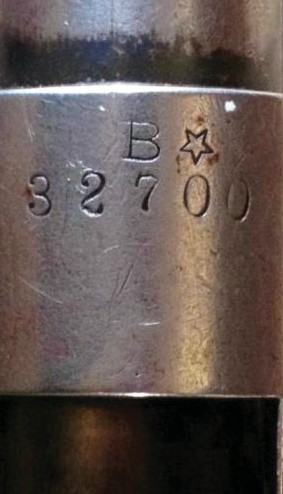 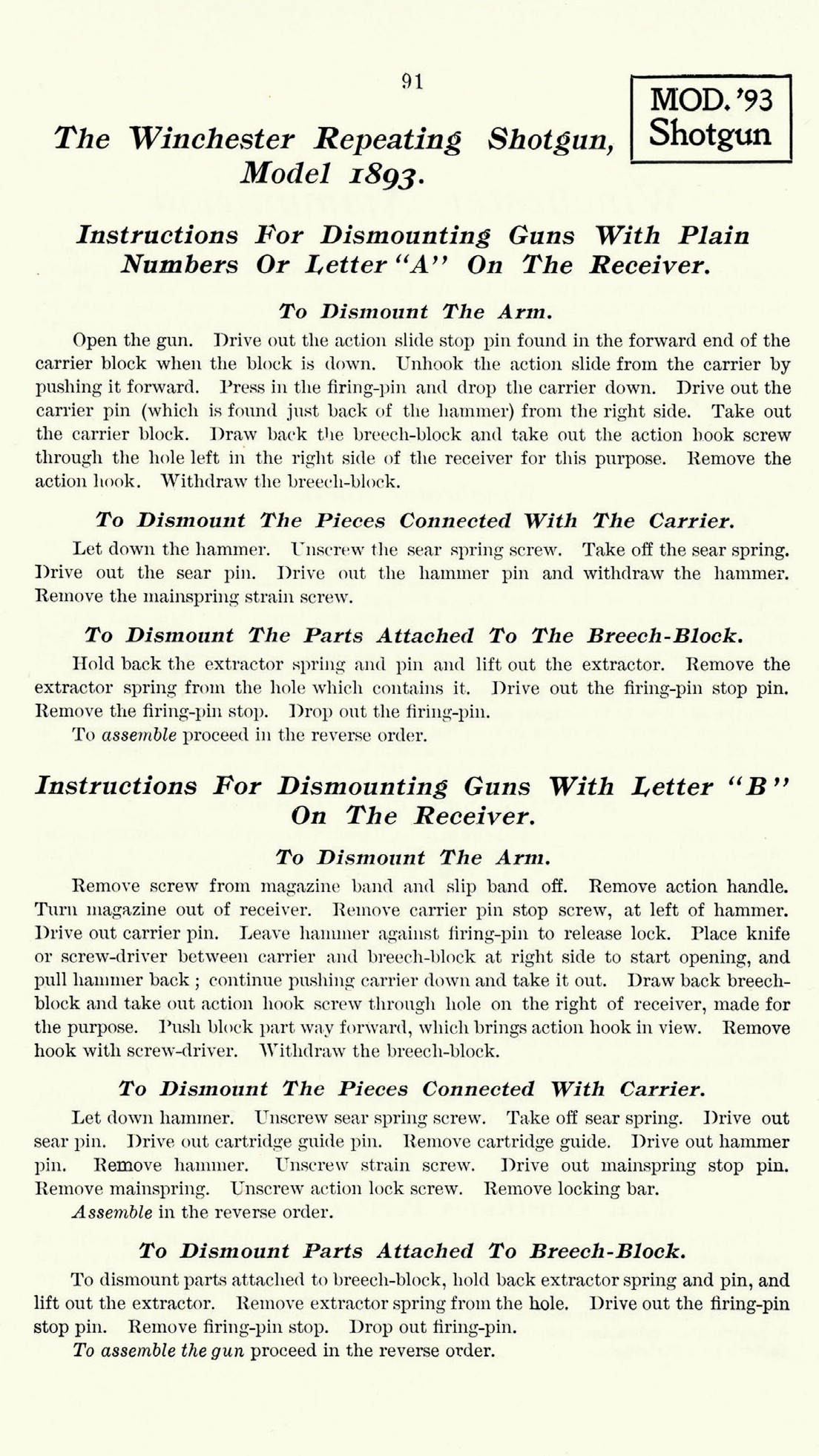 The “A” added above the serial number indicates that Patent No. 487659 was incorporated. That patent changed the breech locking system such that it required a slight forward movement of the slide handle to unlock the action. On the early production series guns (pre-A), the action could be unlocked (opened) with a simple rearward pull on the slide handle if the firing pin was depressed, or if the hammer was fully down (resting on the firing pin). As of this time, I do not know what the specific mechanical or design change was that Winchester made that necessitated the addition of the “B” or the “star” above the serial number. If any of you who read this know the answer, please get in touch with me. 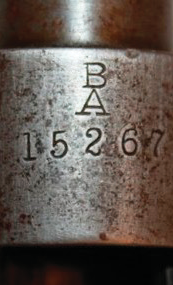 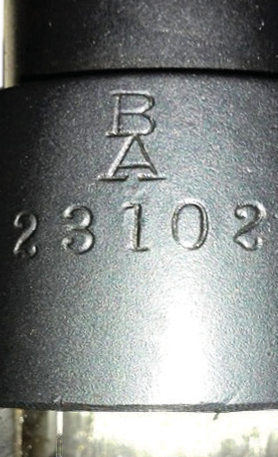 Right: One other point of interest concerning the production changes that necessitated the serial number letter changes was addressed by Winchester in their catalogs. Specifically, Winchester published separate disassembly instructions based on the letter marked on the receiver frame. This is a scanned copy of the instructions as contained in several Winchester catalogs.

Standard barrels were made of cold rolled fluid steel. Special order barrels in 3-blade (Good) or 4-blade (Fine) Damascus were available, but were rarely ever ordered. In my research of the warehouse ledger records, I found just (424) guns that are listed with a Damascus barrel. That equates to just 1.24% of the total production. Note that the standard barrel markings shown above were rolled stamped right into the Damascus steel.

Unless specified, all barrels were choked Full (unmarked), but could be furnished at no extra cost with a Modified choke or Cylinder bore if so ordered.

Two standard barrel lengths were listed: 30 and 32-inch. Ultimately, many different barrel lengths were made on special order, from as short as 16.5 inches up to 31 inches. The table below shows the production numbers for the more common lengths found.

There were just two different barrel markings that were used. The Type 1 is found on the Pre “A” series guns, and the Type 2 marking was coincident with the introduction of the “A” series.

Just one style of slide-bar marking was used as shown below:

The sling bar and ring on a Model 1893 Riot Gun 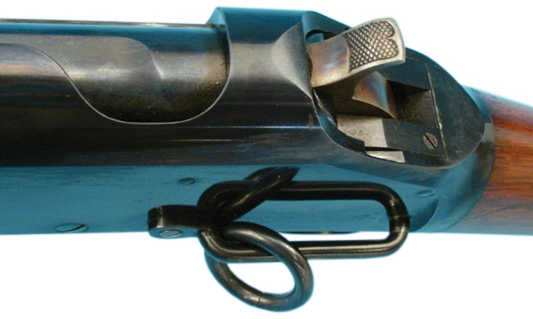 As listed in the April 1894 catalog, the standard Model 1893 shotgun was $25.00, and the Fancy grade was $62.00. The following special order features and associated costs were also listed:

The standard butt stock used a smooth steel plate with a widow’s peak at the top. A black hard rubber butt plate with the Winchester Repeating Arms Company logo was a special order item.

Pistol grip butt stocks were standard (with the round knob). An English style straight grip butt stock was made for a small number of guns as a special order item.

There were three “carbine” style Riot Guns that were factory fitted with a sling bar and ring.

As previously mentioned, Winchester did manufacture several other variations of the Model 1893 that were not cataloged. A complete survey of the Model 1893 ledger records revealed the numbers shown at the upper right.

As can be seen, there were only 1,083 non-standard Model 1893 shotguns made, and of that number, more than half of them were Riot Guns.

The “Elliot” guns listed in the warehouse ledger records were actually a specific configuration of the Trap Gun. They featured a straight grip (English style) butt stock, oil finished checkered stocks, rubber butt plate, 13 ¾ inch LOP, and a 2 ¼ in Drop at heel. One of the four Pigeon grade guns is listed as “Elliott”.

Another rarity in the Model 1893 was factory engraved guns. Serial numbers “1” and “2” are listed as “Fine Damascus, Checkered stock, Rubber butt plate, Engraved $15.00, Gold receiver”. Those two guns were undoubtedly used to help Winchester promote the Model 1893 at Expositions and similar events. Their whereabouts today are unknown.

Any Model 1893 shotgun found these days in decent factory original condition is a real find, and it is most certainly a highly collectable Winchester. Those that are found with factory special order features are truly rare!

Happy hunting and collecting to all,

A Cartridge in Brief: .280 British