Rifles of the German Kamerun Schutztruppen

Brief history of Cameroon
The colony of Cameroon (known in German as “Kamerun”) had its port and capital at Duala. There had been a German trading post there since 1868. Rubber was the major export of Cameroon but tobacco, palm oil and bananas were also produced. Although the borders of German Cameroon had changed on paper several times in negotiations (with Britain and France in 1885, 1894, 1906 and 1913) some parts of the interior still remained unexplored and largely untouched by colonial rule.  After Germany’s defeat in the First World War, the Treaty of Versailles in 1919 stripped Germany of all her colonies and overseas possessions. Cameroon was awarded to France with a small section next to Nigeria going to Britain.

Cameroon Schutztruppen
The pre-war peacetime strength of the German Cameroon Schutztruppe was approximately 185 German Officers, NCOs and staff and 1,550 African other ranks organised into 12 infantry field companies (“Feldkompagnie”) and one artillery Abteilung consisting of four 9cm 1873/91 field guns. Once the Polizeitruppe, reservists and re-enlisted soldiers had been added to their strength the wartime peak of the Schutztruppe in Cameroon was 1,460 Germans and 6,550 Africans organised into 34 companies. This full strength was however impeded by shortages of weapons and ammunition.

The Cameroon Schutztruppe were issued the Mauser Jägerbüchse 1871 or JB71 for short. Photographs also show the use of the Kar88 by mounted troops. By 1912 most of the Schutztruppe had been re-armed with the Kar98az (98a), leaving stocks of the old JB71 for new recruits and reservists raised after the outbreak of War. According to Hew Strachan’s “First World War in Africa” Cameroon had 3,861 rifles of the Mauser 1898 type with two and a quarter million rounds and only 2,920 rifles of the Mauser 1871 type with half a million rounds.

Due to the shortage of ammunition, spent rounds were reloaded with locally made gunpowder (or using nitro-glycerine requisitioned from civilian mining operations) with varying results and original 1898 rounds were prioritised for use in machine guns. Attempts were also made at locally made rifles but their unreliability made them extremely unpopular.

Note: Sch. A. unit markings comes from a very small/rare unit. This unit and it’s markings seems to be a bit mysterious.

Rifles and Carbines of Cameroon Schutztruppen 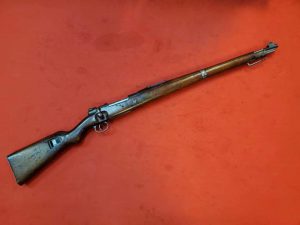 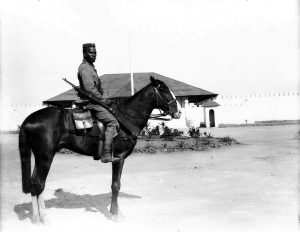 Based on these photos it seem, that the berittene Abteilung of the Kamerun Schutztruppe was issued the Gew.98, which is first evidence of its use in Kamerun. Interestingly regular units used the Kar.98(AZ), so seem a bit like reversed roles! Like DSWA, the mounted Kamerun units acted in a role more like dragoons/mounted infantry and not true cavalry. 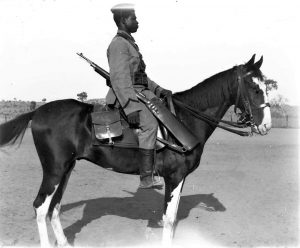 Note also the DSWA mounted equipment issued to this unit, but worn with shoulder straps crossed in front.

References
The German Colonial Troops from 1889 to 1918 by Jürgen Kraus and Thomes Müller.
Mauser Military Rifles of the World fifth Edition by Robert W. D. Ball
http://www.germancolonialuniforms.co.uk
By Chris Dale
The Kar98a by Peter Kuck
C&Rsenal by Othais and Mae
Additional information by Klaus Ahlf