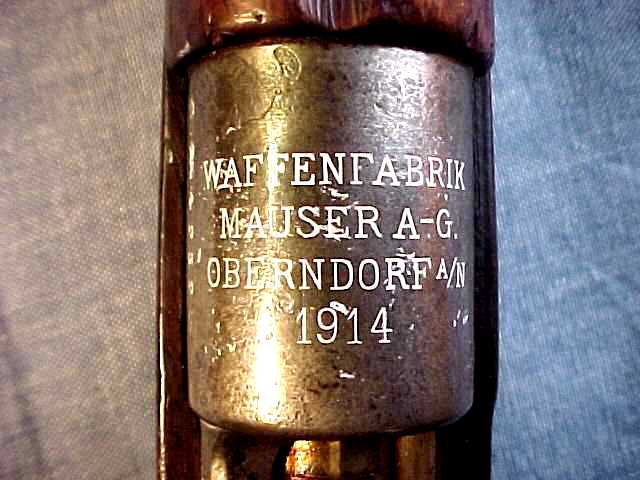 Boxer rebellion was broke out after 6 months. In August 1900, Emperor Guangxu fled out of Beijing. Any talk of new rifle would have to wait. A year later, China singed Boxer protocol in which China was banned from importing armaments for two years.

Until 1903, Zhang Zhidong wrote another memorial to the Emperor about restructure national arsenals under central government control. In the memorial Zhang recommended to adopt a caliber as same as 6.5 Arisaka. He also pointed out his envisioned 6.5 Chinese cartridge shall have a fatter and shorter case than Arisaka to make a difference.

Another memorial to the Emperor dated 1903, Co-singed by Zhang Zhidong and Wei Guangtao, new Governors-General of Liangjiang, reported Jiangnan Arsenal and Hanyang Arsenal jointly tested several sample rifles. This report did not give details about the models or quantities of  sample rifles they had tested. But it does provide final results of the test. The results shown 7 m/m cal Mauser Mod.1903 and Japan Type 30 Arisaka were the best among all the samples. Type 30 had the best penetration depth which penetrated 58 wood boards and 6.8 m/m deep steel target. Mod.1903 placed in second which penetrated 50 wood boards and 5m/m deep steel target. But Mod.03 has better design means fewer component parts than Type 30. Zhang and Wei suggested to adopt a 6.5m/m caliber Mauser Mod.03 based on the trial results. This trial influenced Guangdong Arsenal and Sichuan Arsenal’s decision of purchasing gun making machines and tooling.

A Japanese Army Artillery Colonel called  Tokuzo Mitakata (鑄方德藏) appeared in a series of Zhang Zhidong’s telegrams during 1905. He was the prominent figure in persuading Zhang to believe 6.5 Arisaka was the best choice. Tokuzo Mitakata served as Zhang’s personal military consultant from Dec 1901 to Dec 1903. I believe Zhang’s knowledge about rifles and ballistics mostly came from him. In letters Zhang asked Tokuzo several times that if 6.5 Arisaka was weak. Mitakata promised 6.5 Arisaka was power enough to defeat any enemy. Zhang did agree with him and said “your opinion is important and I cannot agree with you more”. In one letter Zhang even wrote “Chinese soldiers are too weak to fight in close range so they need an accurate weapon which able to start firing out of the range of enemy”.

Though many Chinese officials realized small caliber cartridge had its own edge but still some people believed it’s a weak cartridge and against to adopt 6.5 m/m caliber. They asserted Japanese 6.5 m/m caliber rifle had a chance to kill only by hitting fatal parts of body otherwise it won’t kill. Governors-General of Liang’guang Cen Chunxuan（岑春煊）quoted foreign observers’ testimony during Russio-Japanese war that“Japanese rifle caliber is too small, some Russian soldiers get several shots still be able to fight, and their wounds recovered fast”.

Li Weige, a Chinese technical officer visited European arsenals during the time. He received a telegram from Zhang Zhidong who requested him to research which caliber is the best for rifle.  He later reported to Zhang Zhidong said “It would be better to adopt a caliber larger than 7m/m”. Zhang Zhidong also consulted Germans why they did not change to a smaller rifle caliber, he got the answer that “The cost of changing 7.9 m/m to new caliber would be enormous”. Zhang stated China did not produced too many 7.9 m/m rifles so far thus as fast changing caliber as less costs.

In 1904, Zhou Fu took the office of Governors-General of Liang’Jiang. Zhang Zhidong sent him telegrams and successfully persuaded him to agree with his idea of adopting a small caliber rifle. In early 1905, Zhou Fu ttansfered the 1903 trial results to Governor-General of Zh’Li, Yuan Shi’kai, to acquire his opinion. Yuan wrote a letter to General Xu Shichang whom he appraised “has good knowledge of weapons”. Days later Zhou Fu wrote to Zhang Zhidong said Yuan Shi’Kai and Xu Shichang both agreed that no significant difference between the power of 6.5m/m and 7.9 m/m. Yuan Shi’kai had purchased Type 30 rifles from Japan in 1903 to equip his troops, (so called “Manchu Arisaka” among US collectors) he was satisfied with the performance of Type 30.

This time Zhang Zhidong’s proposal earned support from two key figures in the Emperor’s court. Emperor Guangxu issued a decree to let War Department make a thorough plan. I do not have any document to show us the details of the process of decision making and no materials to tell us why they chose 6.8 m/m. Zhang Zhidong sent a telegram to War Department in Feb 23 1906, he want to know if the department determined the caliber because the last time he was informed  from the department that the caliber shall be smaller than 7 m/m but still did not give exact caliber. In June 2, Governor General of Zhi’Li Yuan Shi’Kai, Minister of War Department Tie Liang, Prince Qing and Xu Shichang filed a memorial to the Emperor stated their final opinion is “new repeating rifle caliber is 6.8 m/m with 115 times caliber length barrel, muzzle velocity 650 m/s”. In June 28, War department released finalized statement officially adopted 6.8 m/m caliber.

I haven’t found any documents can tell us why they chose 6.8 m/m rather than a more common 6.5 Mauser or 7 Mauser. My speculation is because of opposing voice from other high officials against adopting 6.5 caliber, Chinese made a compromise by adopting an intermediate caliber between 6.5 and 7, which is 6.75.  It’s not necessary to keep two digits after decimal point, so rounded to 6.8.

Although there was still some opponent voice of adopting small caliber, China was going to have a new small caliber rifle. But the dispute never got simmered down.