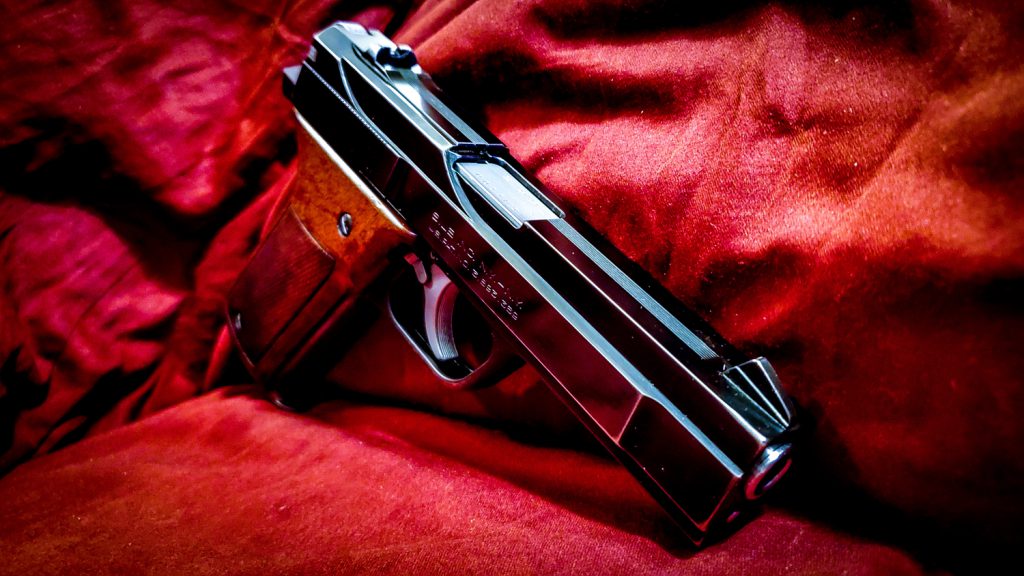 Pistol Phylogeny Part 1 – Introduction
For some time now, the author of this essay has harbored a fascination with firearms designs.  More specifically this interest has lingered on the various forms of operating and locking systems that have been employed in firearms over the years.  And nowhere is that variety more apparent (and more “affordable” to collect) than in semi-automatic handguns.

Now perhaps it is his background in biological science, but in order to order his collecting priorities, he has attempted to better categorize these sundries systems and locks into a phylogenetic tree of sorts – a family tree of related designs in categories and subcategories.  To that end is presented an essay on the…
PHYLOGENETIC PROSPECTUS on reasonably PURCHASABLE PISTOLS
The more difficult task that must first be tackled, is identifying and arranging the widely varied designs.  There are lots of opinions, often conflicting, about the nomenclature surrounding this topic, but herein the author has attempted to develop a framework for evaluating and defining these systems more concisely.  To do so, these considerations must start at the most basic concept of auto-loading firearms – harnessing energy from a shot to drive the action of the gun.

When the round in the chamber of a hypothetical gun is detonated, the powder burns to create rapidly expanding gases, which exert outward pressure and force in all directions.  In general, the force directed forwards is expressed by driving the bullet out the barrel, the rearward force expressed as recoil energy, and the remaining outward forces expressed as contained (hopefully) chamber pressure. At the core of all auto-loading designs is the balance between using and containing that pressure – open the breech too late and there isn’t enough force remaining to drive the action; open it too early and risk burst casings, gas, and shrapnel.

Therefore, in categorizing these arms, the central focus will be given to defining them by the mechanisms that lock, or otherwise balance, these forces.  Ancillary to these categories are the closely related operating systems that harness the energy of firing to manipulate these locking mechanisms.  While there are many other ways these guns may be categorized (by fire control design, magazine loading and feeding methods, etc.), the variation found in these are not as critical to the core functions of the actions of these guns as are locking and operating systems, and are therefore not going to be widely considered in the following.

The energy of firing can be harnessed in many ways and by many mechanisms, but in general these can be narrowed down into three broad categories: unlocked systems, locked systems, and delayed systems.

Unlocked systems are usually the simplest systems.  The barrel and breechface are in no way mechanically interconnected, and when they are at rest, they are only held closed by the force of the recoil spring.  Upon firing, forces from within the chamber are solely responsible for the opening of the breech.  The only counterforce applied comes from the recoil spring and inertial mass of the moving components.

Locked systems, on the other hand, use much more sophisticated mechanisms.  The barrel and breechface are (as the name implies) mechanically interconnected and locked.  This is such that the force originating within the chamber is not, on its own, able to open the action.  While the chamber forces are ultimately used to drive the system, the force needed to unlock the system comes from a source external to the chamber.  For instance, the recoil force in a Glock would continue to drive the locked barrel and slide rearward except for the barrel being arrested and pulled out of lock by the comparatively immobile force of the frame, as held firmly by the shooter.  This force is known as the “normal force” in physics – in very layman’s terms, the normal resistance of an object to move.  In the unlocked and delayed systems, this normal force merely slows the opening of the action, whereas in a fully locked system it provides the more specific task of mechanically decoupling the components of the action itself.

Delayed systems are often neither more nor less complex than locked systems, but they do sometimes require a little more head scratching to understand.  This comes partially from the wide spectrum of delaying mechanisms found, which range from providing little if any practical delay, to being nearly and debatably locked.  In these systems, the barrel and breechface are usually mechanically interconnected, but not fully locked.  This means that forces from within the chamber are directly responsible for opening the breech (like an unlocked system), but the counter force applied is greater than mere inertia and spring pressure.  There are instead additional mechanical disadvantages baked into the designs that the chamber pressure must overcome in order for the breechface to slip free and open.  Unlike a locked system, no external normal force is needed to unlock the gun, but rather the energy from within the chamber itself has to be partially diverted to overcome the specific delaying factors. 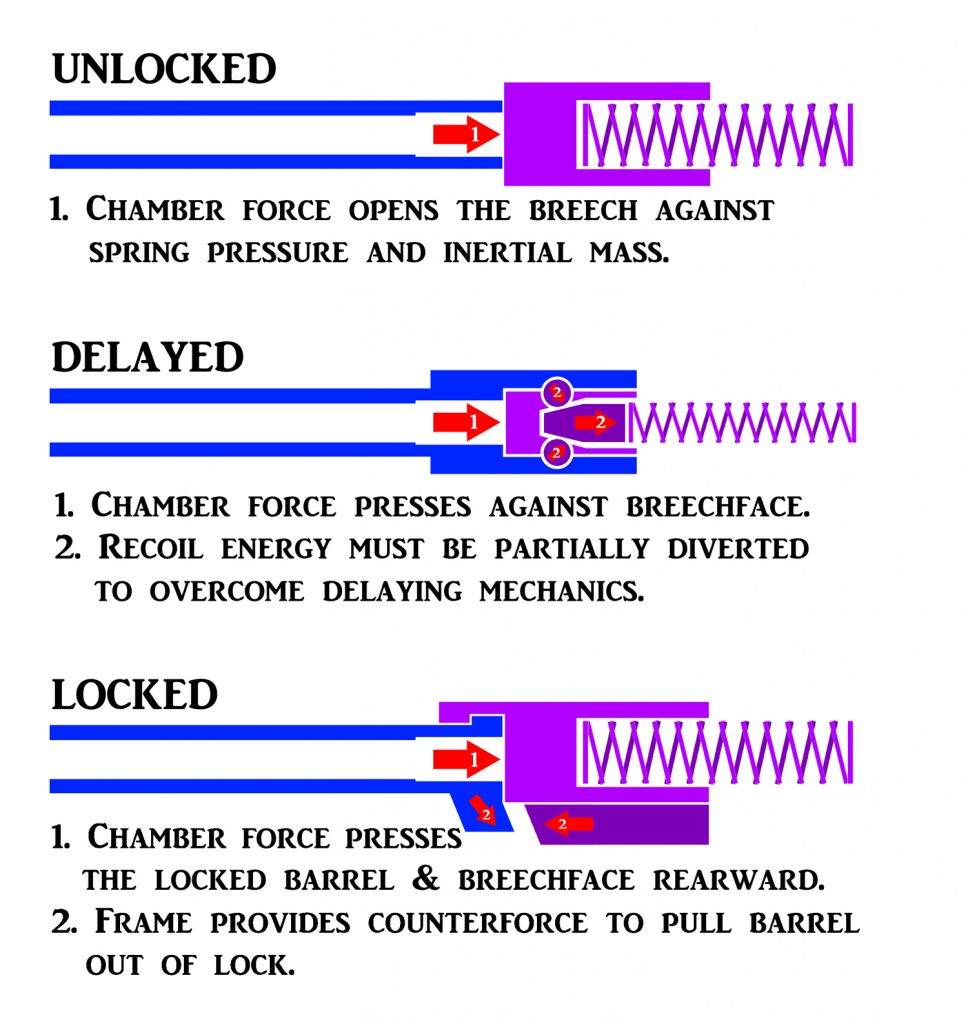 Now that the main categories have been defined and the differences between them sorted out in the most pedantic manner possible, the author shall commence with looking at the various categories and specific mechanics of each. 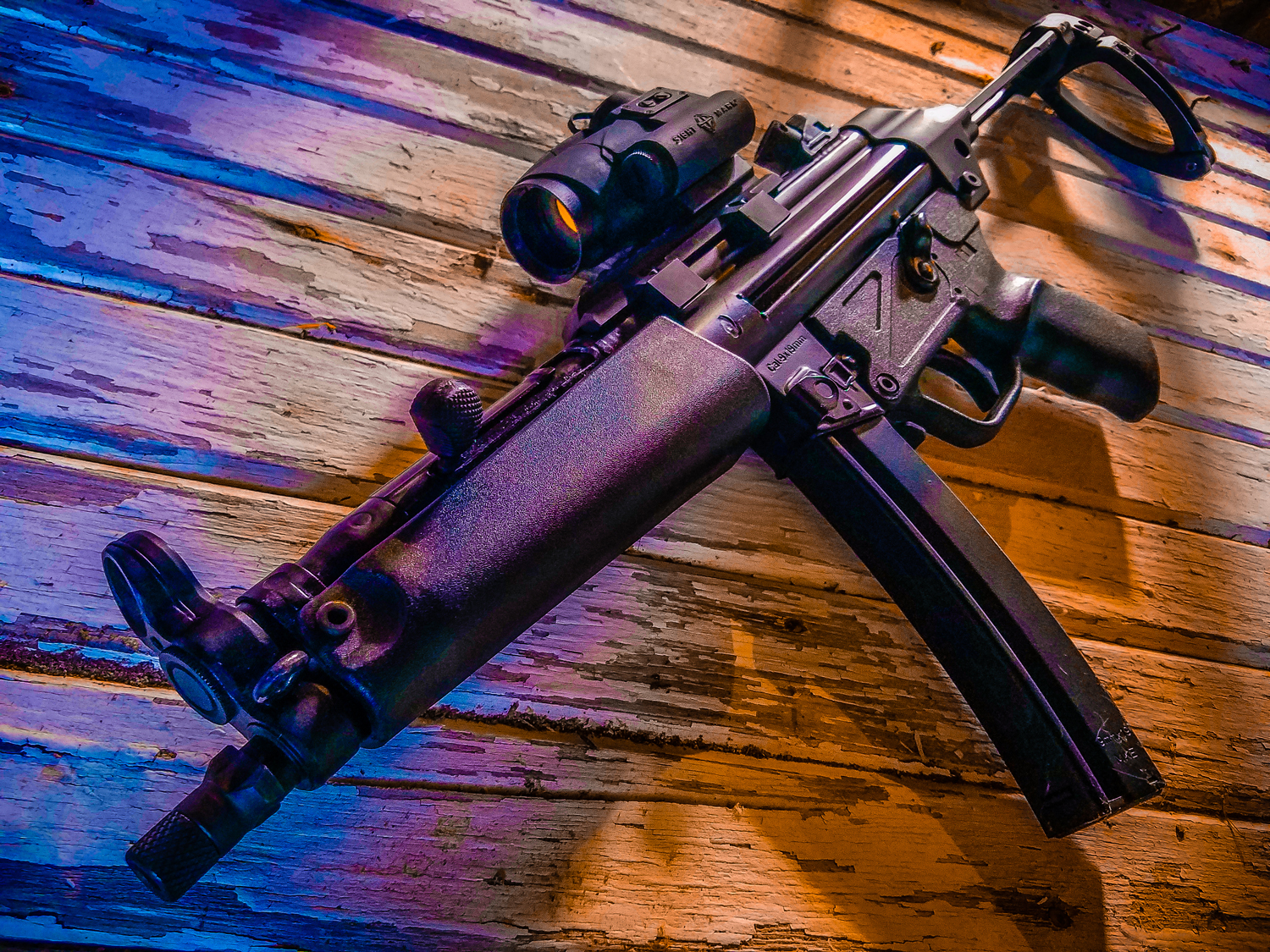